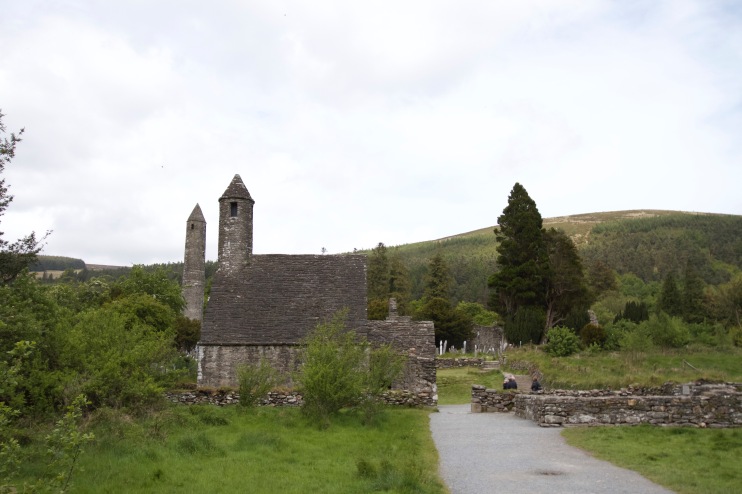 The name for Glendalough is from the Irish Gleann de Loch which translates as a valley of two lakes. The name really exemplifies the quiet, isolated beauty of the place.

The settlement in County Wicklow Ireland was founded by St. Kevin in the latter half of the sixth century. This was a period of great religious change in Ireland and there was still tension between the older faiths and Christianity. Christianity was still the Celtic rather than Roman form and there was a tradition at the time of small and very isolated communities living lives of asceticism to sacrifice themselves to the love and worship of God. It was in this tradition that St Kevin founded Glendalough. He probably lived there alone for roughly seven years, but word eventually spread and he was joined by others so he founded his first actual settlement. The original site of the settlement was on the lake but as the community grew the space became to limited and they moved to their present site.

Life as Glendalough was not always calm and isolated, there were Viking raids in 790, 834, 889 and 938. But while they would have been damaging they did not affect the overall longevity of the settlement. The monks would not have been the only inhabitants of the settlement, there would have been craftsmen, pilgrims and students. The monks educated the children of the aristocracy. Glendalough was a centre of learning.

The first major change to Glendalough came with the invasion of the Anglo-Normans in 1169. The Anglo-Normans were keen to absorb Glendalough into their version of a religious community and in 1173 Richard Strongbow gave the cathedral and parsonage to his clerk Thomas. By 1214 Glendalough was incorporated into the Dublin Diocese.

Over the years Glendalough became a symbol for Celtic resistance, and it found itself in a territory that was openly in rebellion against the English. It was in fact sacked by an English force 1398. Glendalough began to fall into decline over the next two hundred years and the Flight of the Earls (which was the departure of the last of the great Gaelic chieftains) in 1601 spelled the end for the community and the churches fell into ruin until they were renovated by the Board of Works in the 1870s.

The photos are all mine, bar the first one which I have permission to use.