Urnes Stave Church in Norway is probably the most remarkable medieval structure I have ever visited. It is aided in this status by the truly incredible surroundings.

It is, however, its completeness as a 12th century wooden structure inside and out, and especially the carvings, which make it truly remarkable.

This is the first of what will be a series of posts on the history of Iceland, Denmark and Norway. I’m beginning with Urnes because of its uniqueness and because it is UNESCO World Heritage listed.

Urnes sits on eastern edge of the Luster Fjord. It was built around 1150. There had been churches on the site before, parts of which have been reused in the church you can see today. It is the oldest stave church in Norway and is so distinctive and so influential that its style has come to be known as Urnes Style when it is used in other buildings.

The name stave church comes from the large vertical load bearing posts which form the basis of the structure of the church. Essentially it is composed of a vertical rectangular frame. You can see a cross-section of Borgund stave church below, which gives you the idea of the interior structure necessary for a stave church (Borgund is a lot bigger than Urnes though)

There were once over 1000 stave churches in Norway, but now only 28 remain. Most were built between 1130 and 1350 though a few are later. The black death affected the construction of new buildings after the mid 14th century. The reason they survived, even though they are wooden, is because the wood is coated regularly in pitch to protect it from the weather (this is still done at Urnes). In the case of Urnes it has a stone foundation, which stops it rotting from the ground up. The previous church on the site was a post hole church, the holes have been found in archaeological investigations.

Stave churches are not all the same, they are built along different lines and with different styles. For example you can see Ringebu Stave Church below 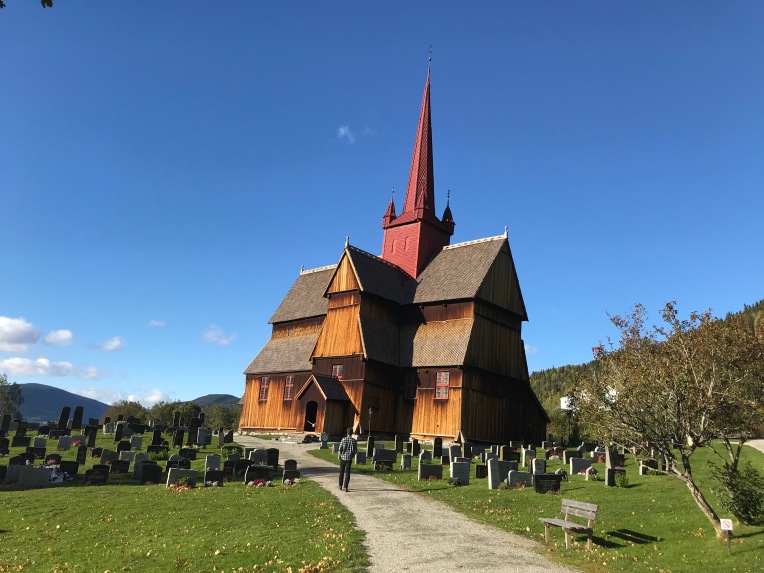 Urnes is one of the smallest, but it is also the most lavishly decorated.

The carvings are truly incredible. They are an amalgam of Celtic, Viking and early Christian design. Some are extremely reminiscent visually of early illuminated manuscripts like the Lindisfarne Gospels and the Book of Kells.

Other exterior carvings from the earlier church include the post you can see below. 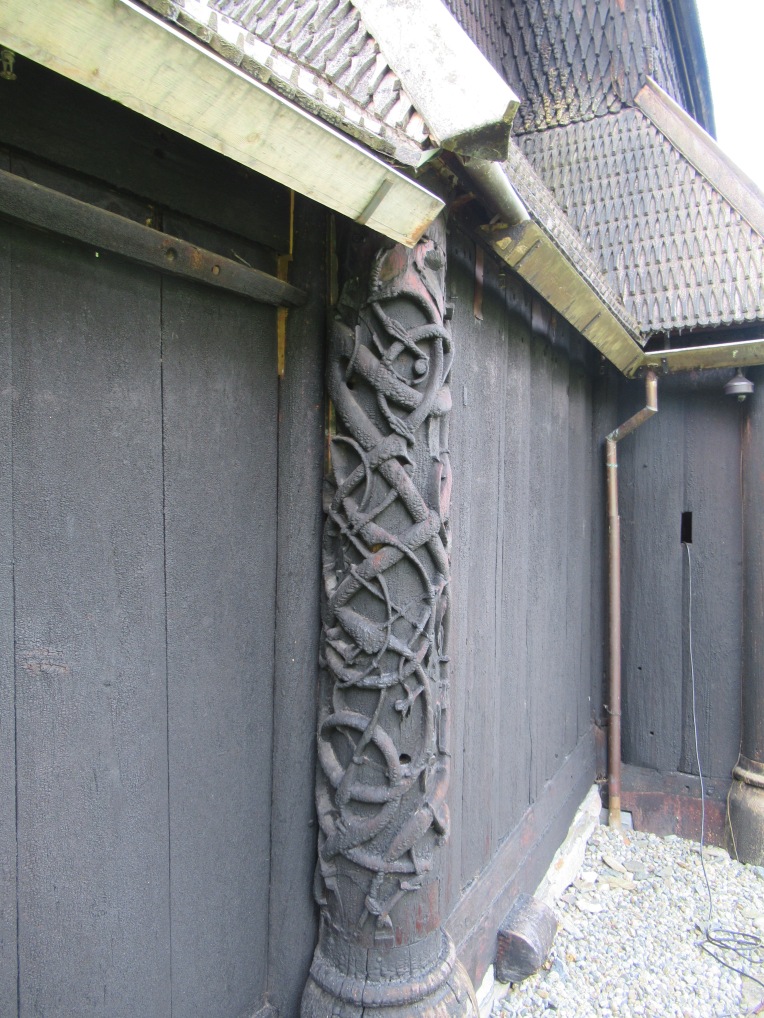 The main entrance to the church is on the west end and you can see more medieval carving on the capitals and it is thought that the ironwork on the door might be original as well.

When you look at the photos of the church from the front you will noticed that there is an odd flap open. 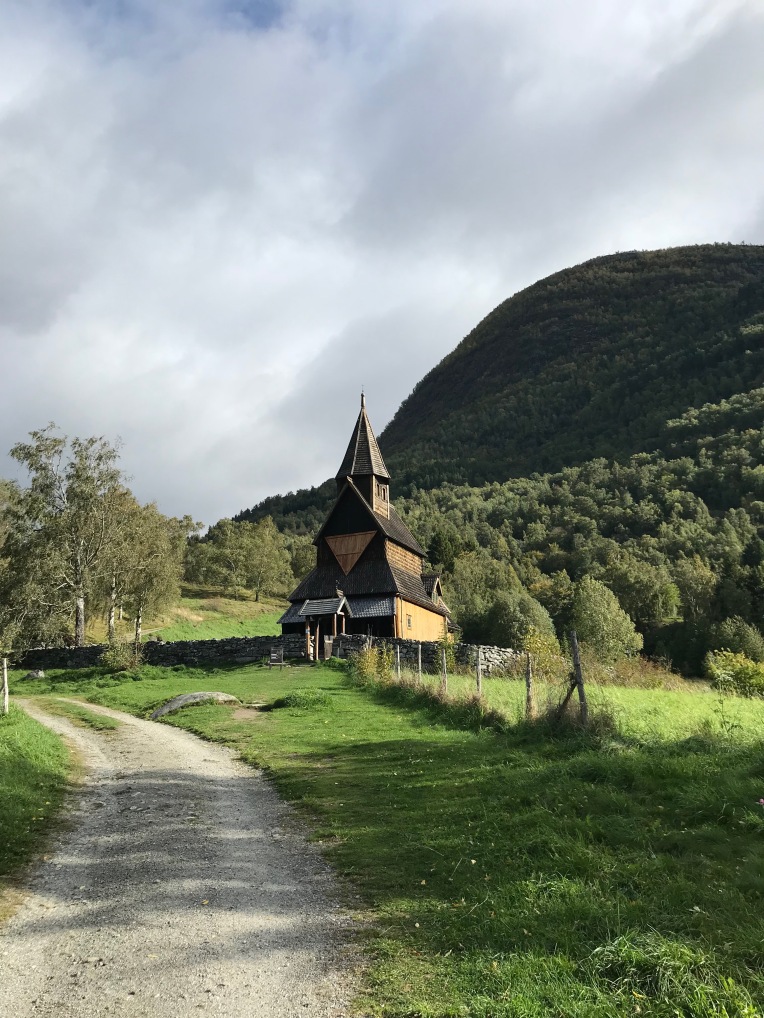 This flap, along with some other panels, are usually closed to protect the delicate carvings beneath. I was lucky enough that when I visited it was open for a conference group and, while it is very weathered, it is still beautiful and thought to be medieval. 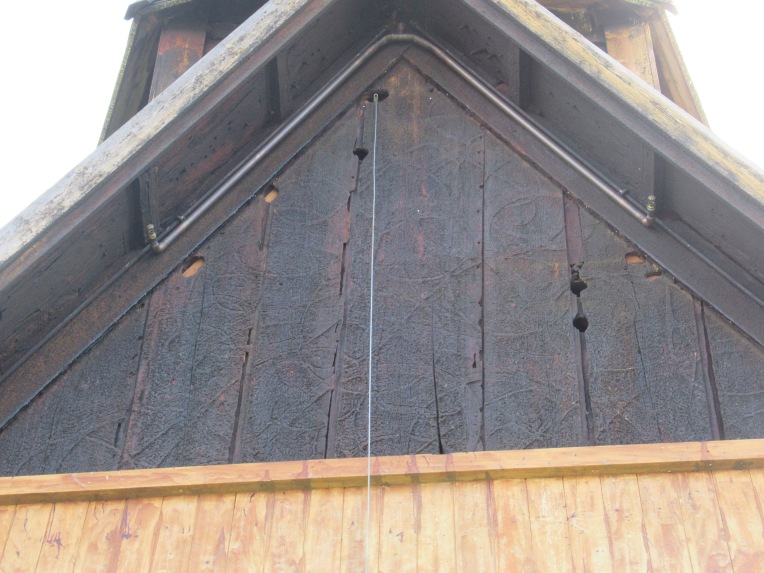 The timber the church is constructed of is largely pine with elements of hardwood. The turret on the church is not original, in 1702 it replaced an earlier one from 1680. The roof was also tiled at one point. The current shingles date to the 20th century when the church underwent careful restoration, when much of the protective cladding was also added. 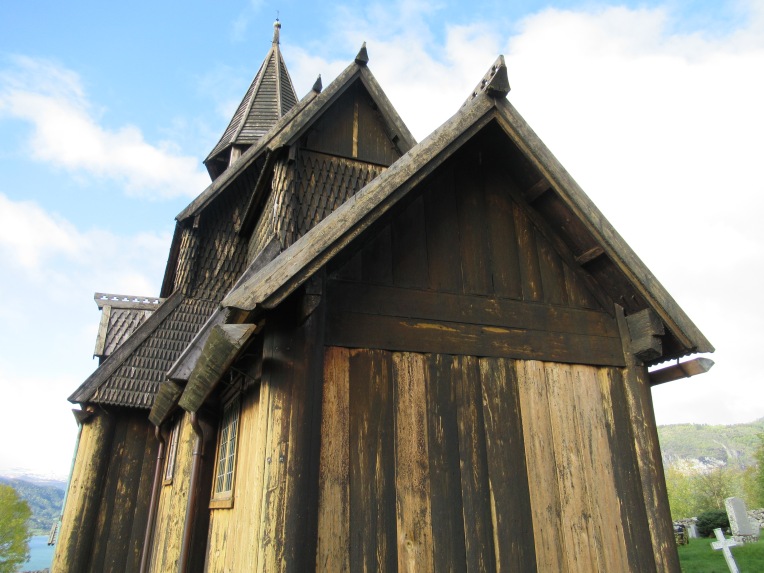 Leaving aside the exterior of the church for the moment, the interior is just as if not more impressive. 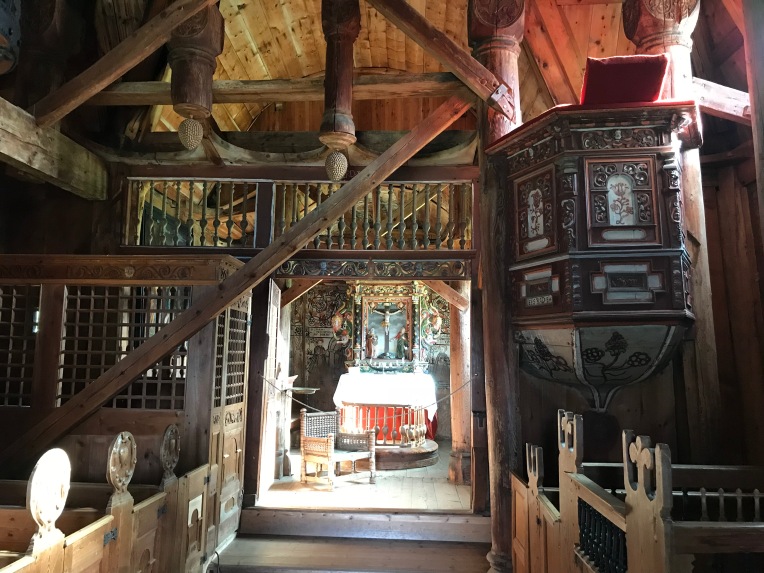 You can see that the floor in the nave is lower than the rest of the church, this was because there was an open space under the floor which was used for burials. It was discontinued in favour of the external cemetery in the 19th century at least partly because of the smell.

The ceiling is 17th century, originally it would have been open like the underside of a boat. The original windows would have been small and porthole like. As you can probably tell the interior has been changed quite a bit over the centuries, but there are still a lot of medieval elements. My favourites are the carved capitals on the columns which then rise up into romanesque wooden arches. These were quite possibly based on contemporary stone churches of the time and are certainly similar to stone churches I have seen in England and Ireland. 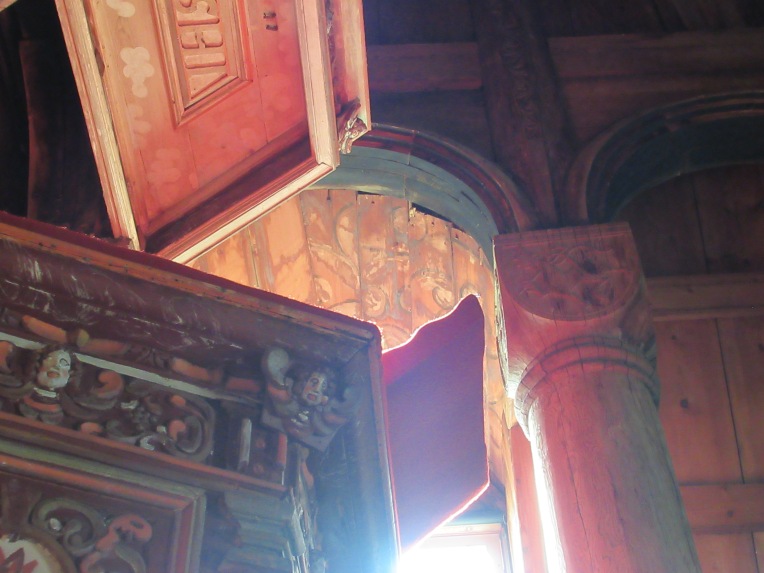 Remarkably some of the medieval fittings have also survived: including the figure of Christ on the Cross with Mary and John which dates to the end of the 12th century

Along with a medieval bishop’s chair 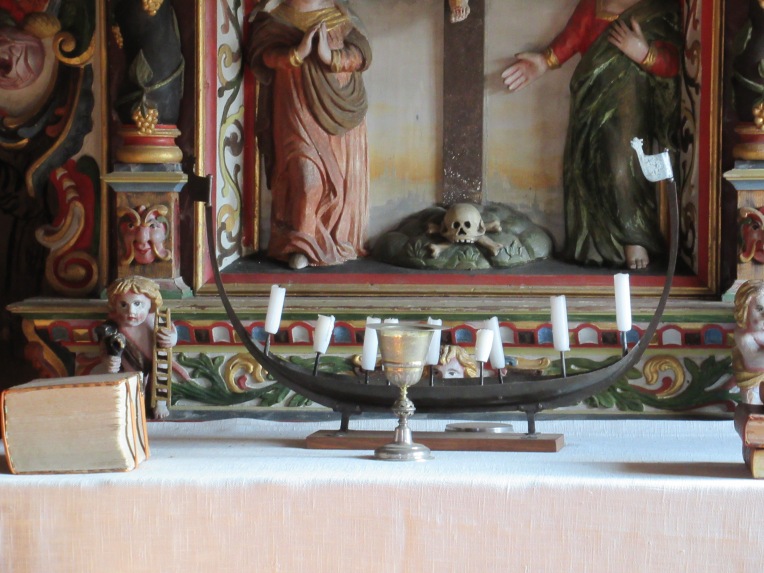 and the chandelier which hangs from the ceiling 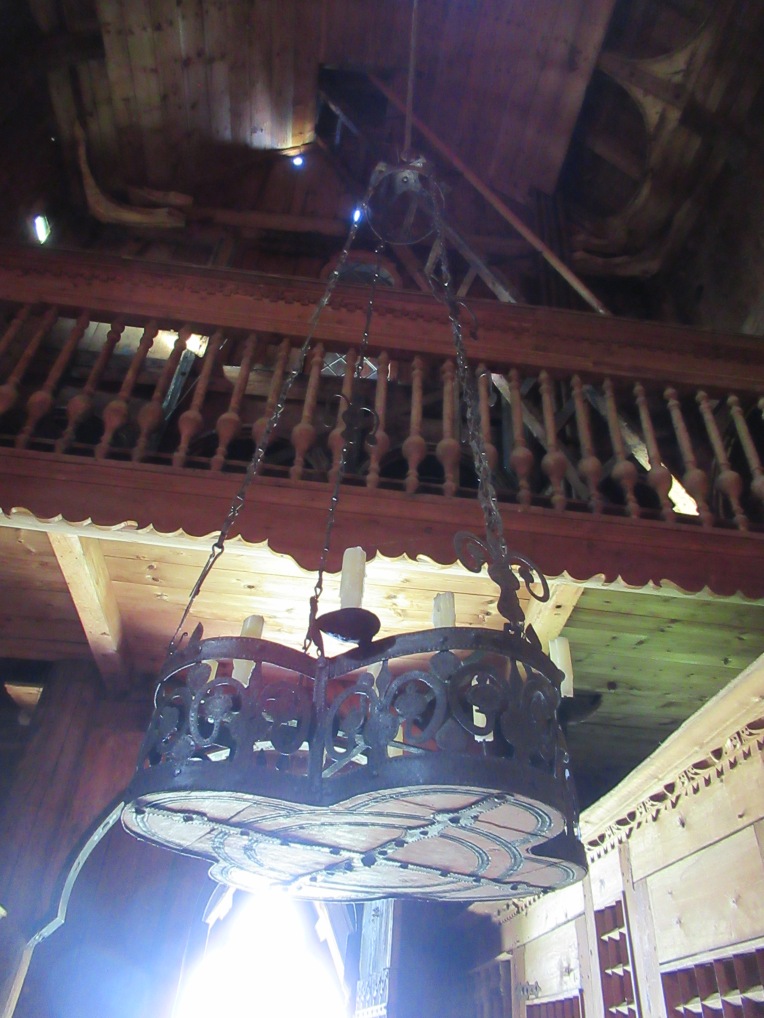 The gallery you can see part of above the chandelier, and above the chancel in the earlier photo, was added later and sadly involved cutting some of the original columns and capitals.

The highly decorated altar and pulpit dates to the 1690s, the chancel was extended out in the early 1600s.

The paintings and figures you can see on the walls are also 17th century.

Originally there wouldn’t have been fixed pews, they were introduced after the reformation and the ones in Urnes are 17th century. The boxed pew you can see in the photo below was for women being brought into the church to be cleansed after childbirth. 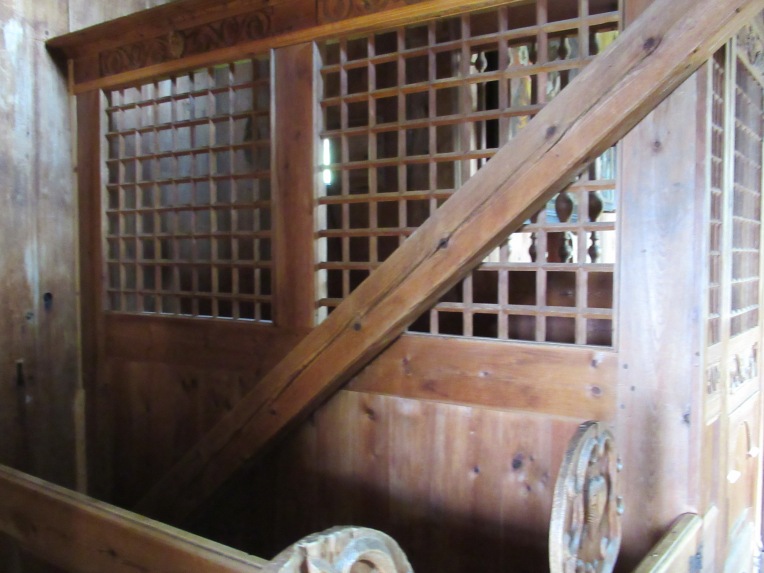 Urnes was probably built for the wealthy local Ornes family, but it was also a church used by the locals. It is an amalgam of styles as the needs of the church’s community changed. It is a testimony to the quality of construction that it is still standing today.

In 1720 it was sold to local priest Christopher Munthe and it remained privately owned until the parish bought it in 1850. By 1881 it wasn’t needed any longer because the parish was reorganised and it was to given to the Society for the Preservation of Ancient Monuments. The parish retained the burial rights in the churchyard and the right to hold services twice a year. This practice continues and Urnes is used by the local community for special occasions. In 1979 UNESCO included Urnes on its World Heritage Register

It met the three main criteria easily with UNESCO saying

Criterion (i): The Urnes Stave Church is an outstanding example of traditional Scandinavian wooden architecture. It brings together traces of Celtic art, Viking traditions and Romanesque spatial structures. The outstanding quality of the carved décor of Urnes is a unique artistic achievement.

Criterion (ii): The stave churches are representative of the highly developed tradition of wooden buildings that extended through the Western European cultural sphere during the Middle Ages. Urnes is one of the oldest of the Norwegian stave churches and an exceptional example of craftsmanship. It also reveals the development from earlier techniques and therefore contributes to the understanding of the development of this specific tradition.

Criterion (iii) : Urnes Stave Church is an ancient  wooden building and is outstanding due to the large-scale reuse of both decorative and constructive elements originating from a stave church built about one century earlier. It is an outstanding example of the use of wood to express the language of Romanesque stone architecture.

Urnes is truly astounding and for such a little church it certainly holds a lot of history.