Peveril Castle perches dramatically on the edge of a craggy hill  looking over the town of Castleton and Hope Valley in the Peak District.

Castleton grew up around Peveril castle and and was first documented in royal accounts in 1196, but was probably there from around 1155 at least. By 1215 it had its own trade fair and it continued on through the centuries to survive as a local hub, even after the demise of the castle.

The view over Castleton and Hope Valley.

Peveril castle itself was originally built, most likely of stone, by William Peveril shortly after 1066. However its most striking feature, the keep, was the work of Henry II. The castle came into Henry II’s hands in 1155 and is an excellent example of the common square keeps that he had built up and down the country.  Peveril came into royal hands after William Peveril’s son, also called William, firstly made an enemy of the powerful Earl of Chester and then of Henry FitzEmpress, who shortly became Henry II. In 1153 Henry had already promised to dispossess the younger William of his estates for treachery and plundering and give them to Chester. By 1155, when he carried out the threat, Chester was dead so Henry kept the castle for himself. The name however survived. Henry II used Peveril as a base to oversee the local area and keep the local barons, who had been used to more autonomy during the period of anarchy, in check. Even when he wasn’t there, and there were only a few guards left to man it, Peveril was a potent symbol of royal authority. It also served as an administration point for the Forest of the Peak.

Peveril was part of the Lordship of the Peak and it was given by Richard I to his brother John when Richard came to the throne in 1189. John however was forced to surrender it due to his rebellion. When John came to the throne himself in 1199 William Ferrers, the Earl of Derby, paid the huge sum of 2000 marks to claim much of the lordship for himself. John however refused to hand over the castles of Peveril and Bolsover, which he saw as the symbols of the authority in the area. He only conceded Ferrers’ right to them in 1216 when his authority was crumbling. However his castellan refused to hand them over and John told Ferrers he could take them by force, if he could. John died in 1216 and Ferrers managed to take Bolsover by force during the first year of the reign of Henry III, however he never attacked Peveril and the castellan moved out by negotiation. Ferrers, however had only been given lordship of Peveril until Henry III came of age. Initially, though, he refused to hand it over. He finally gave up and surrendered it to royal hands in 1223.

Peveril stayed in royal hands until the 1372 when it was given to John of Gaunt, who was the Duke of Lancaster and the third son of Edward III. He was one of the most powerful lords of his time and he possessed many castles. As such he never saw Peveril as being a residential centre and began to strip lead from it to use in other castles. Slowly  the administrative functions of the castle began to drift elsewhere too and by the 16th century the castle was derelict.

The castle was never besieged, so the ruinous state you see it in now is due to decay through time and the stone being repurposed for Castleton below.

looking down on Castleton from the keep.

Peveril stands on a steep natural hill with the precipice-like Cave Dale to the back and one side and Cavern Gorge to the right. It commands the main high ground over Hope valley and was a symbol of authority for all the lords who held it. 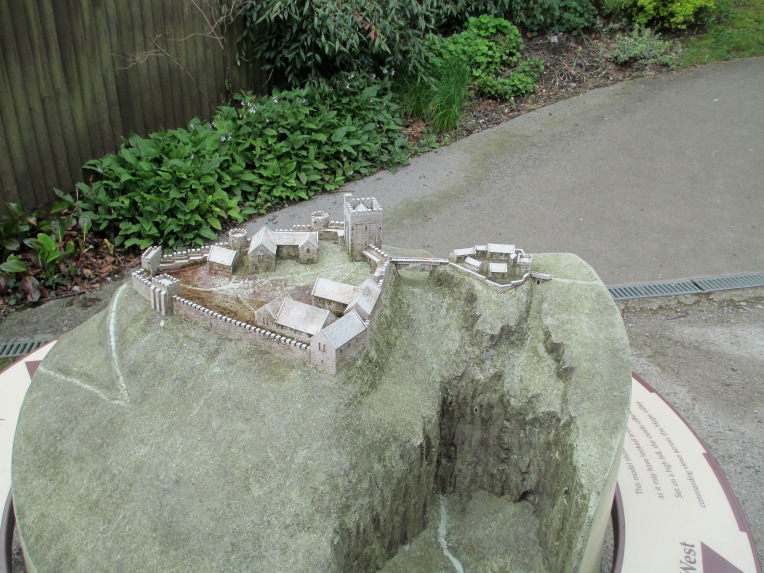 a model of what Peveril would have looked like in around 1300.

The landscape around the outcrop on which Peveril stands.

The path that you take up to the castle now leads you through the remains of what would have been the east gate. It was most likely built under Henry II in the late 1100s. It would originally have been a simply decorated arch.

This path is most likely the route through which Peveril would have been accessed for the majority of its existence. It is very steep but it would have just about been accessible to horses.  Upon entrance to the castle precinct it is the keep which immediately dominates the view.

It stands at approximately 15m high. It would originally have had a parapet. It is less than 12m square and as such is much smaller than other similar keeps that Henry II had built all over the country. It is said to have cost around 184 pounds and to have been built of stone quarried locally. The spiral stair you can see in the photo above is roughly in the same spot that the original medieval stair, built of either stone or wood, would have stood. The keep would have housed a main public space on the first floor entry, and a basement storage area below. You can see the entrance door in the photo below, it is taken roughly where the floor of the main hall would have been. 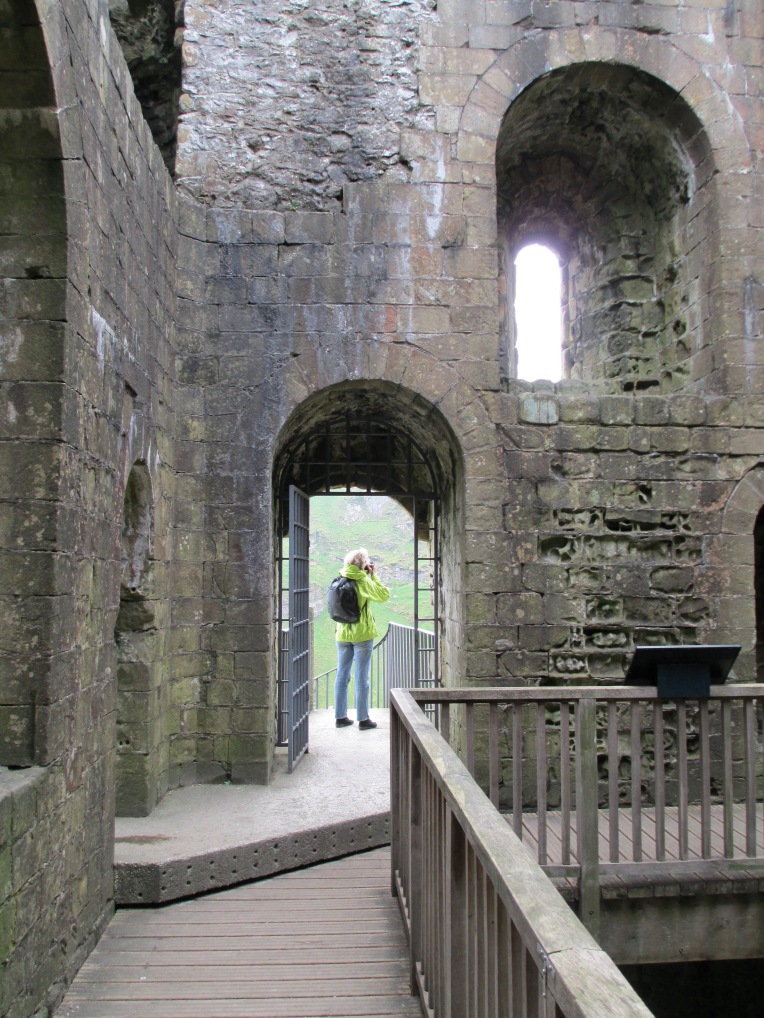 You can see the line of the original pitched roof of the main hall still visible in the outline of the stone in the photo below. 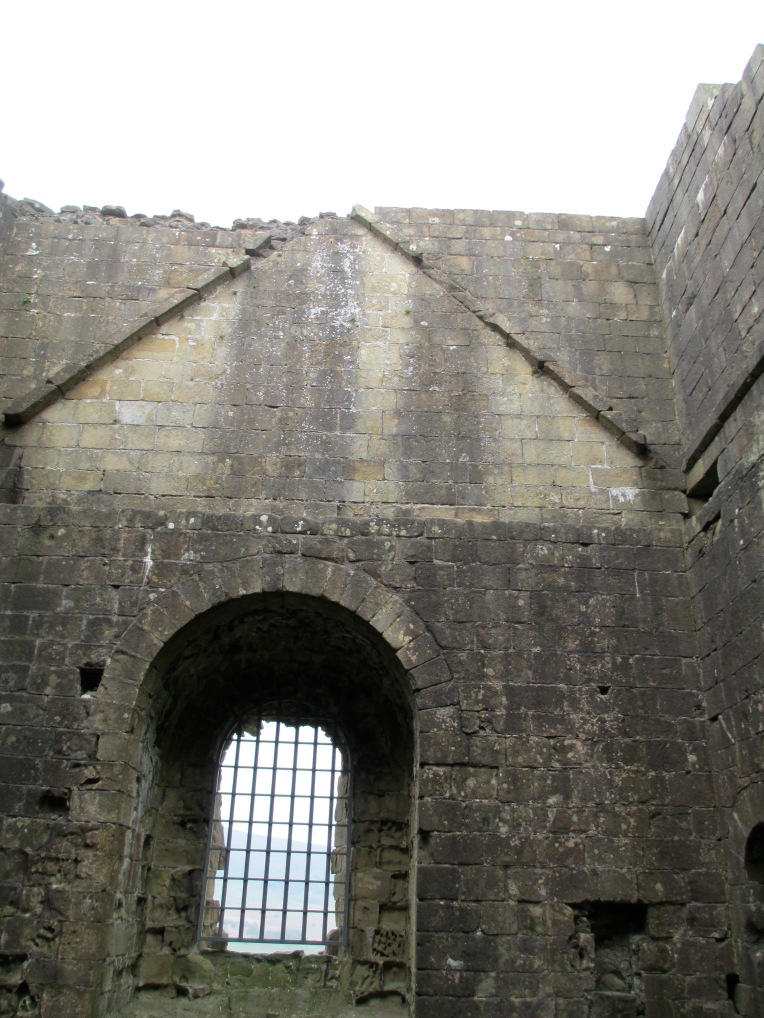 You can see the basement in the photo below. The stair down still survives.

The keep at Peveril was not the only hall. In the photos below you can see the view down from the keep to the area where the new hall and the west gate would have stood. 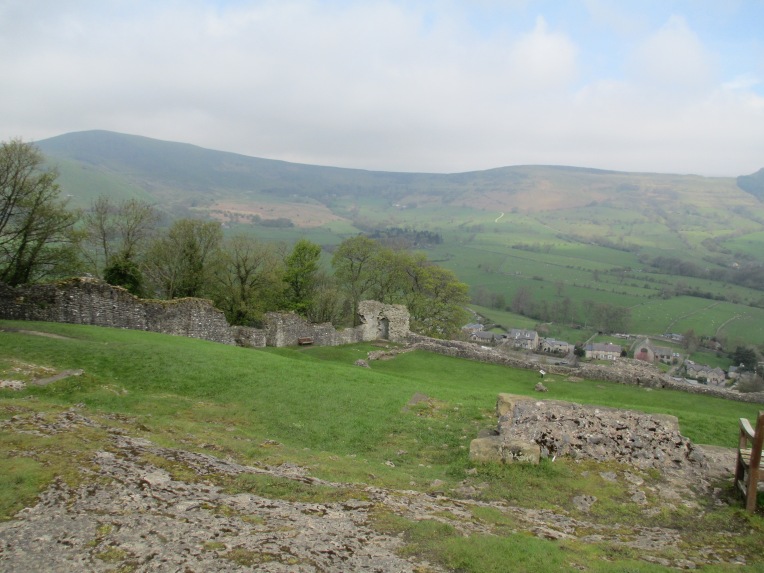 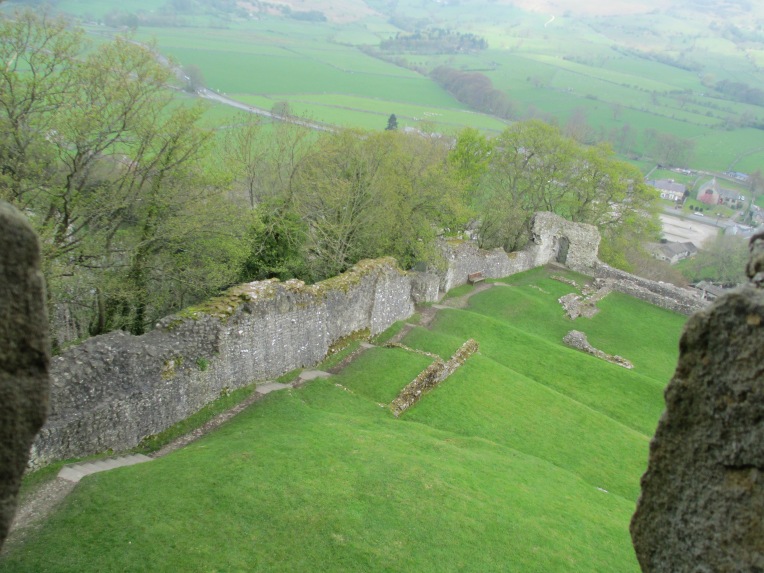 It is not known exactly when the new hall was built, but it was probably in the mid 13th century. It would have had a fire place and a kitchen and been where important people dined. Henry III stayed at Peveril in 1235 and if this hall was complete in time it would have been here that he held court. This area is also the site of the west gate. It would have led to a bridge over the gorge outside, but there are sadly no remains to be seen today. This would have been the other main access point to the castle, apart from the east gate.

Below you can see the area where the old hall and the chapel probably stood. 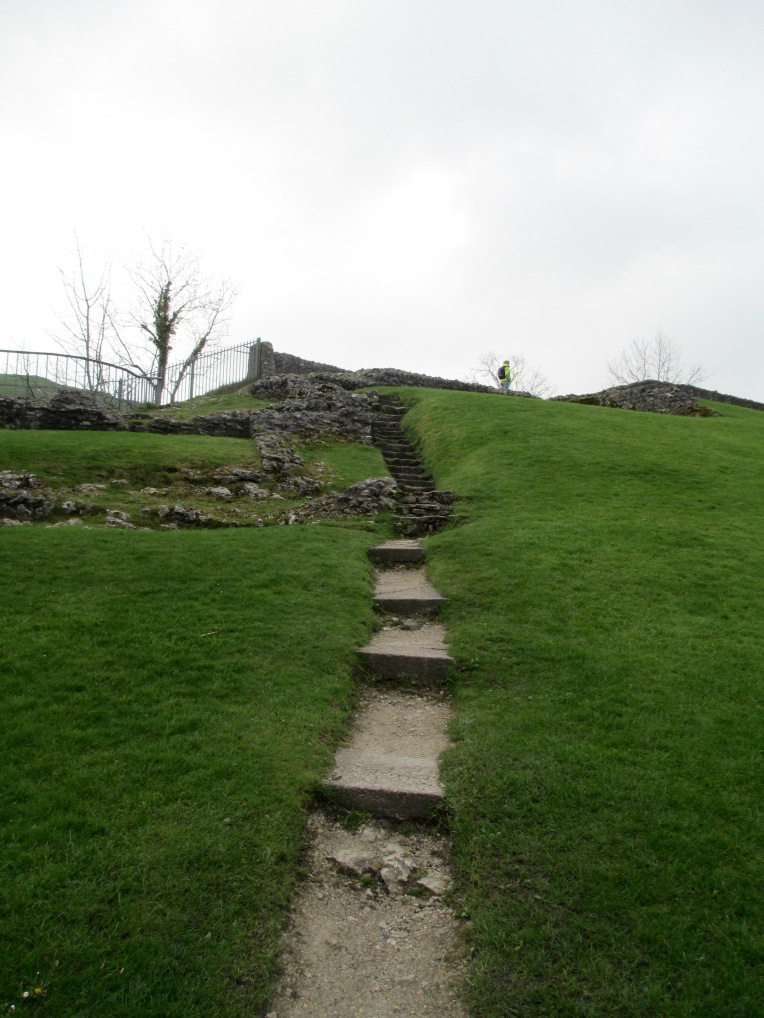 There was also a small circular tower in this section which was built partly of roman stone, repurposed from a nearby Roman site. This was probably a 13th century addition and may not have had much functional defensive use.  The hall itself was most likely in this area in one form or another since the beginning of the castle, the remains today date to roughly the same time as the keep because it was built using the same stone. While it is not certain where the chapel was, we know there was one because of a document from 1264 which mentions it. There is a structure next to the hall that has Norman masonry and is facing roughly east west and has no other known purpose, so it has been interpreted as being the chapel.

This does not cover all of Peveril castle and it is a site well worth a visit. Although it is not one of the largest castles in the country it is certainly one of the more atmospheric and the position it commands is extremely dominating.