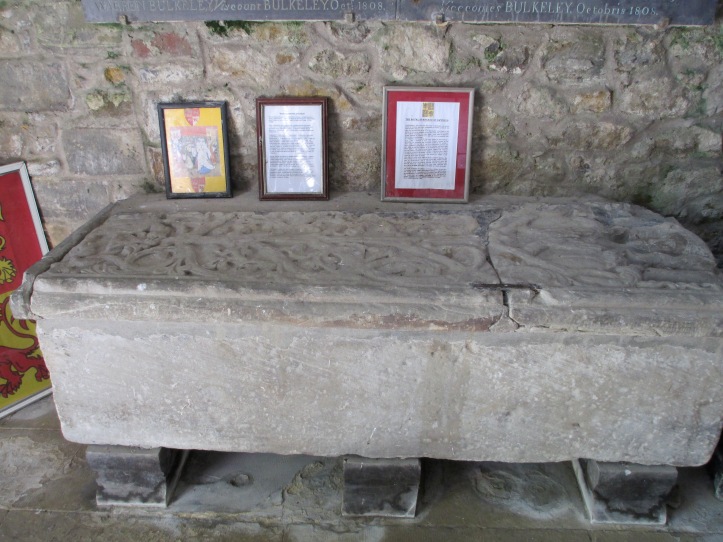 Joan’s tomb. It now lies in Beaumaris parish church with this inscription above it.

This plain sarcophagus, (once dignified as having contained the remains of Joan, daughter of King John, and consort of Llewelyn ap Iowerth, Prince of North Wales, who died in the year 1237), having been conveyed from the Friary of Llanfaes, and alas, used for many years as a horsewatering trough, was rescued from such an indignity and placed here for preservation as well as to excite serious meditation on the transitory nature of all sublunary distinctions.

Joan of Wales was the illegitimate daughter of King John.  She was born in c. 1190 and died in 1237. All we know about her mother was that her name was Clemence.  In 1206 her father King John gave her in marriage to Llywelyn ap Iorweth Prince of North Wales. She was roughly sixteen and he was in his early thirties.

The sarcophagus is now found in Llanrwst parish church. Llewlyn was buried beneath the high altar of Aberconwy Abbey, but about forty years later Edward I wanted the land the abbey stood on to build Conwy Castle. So the monks moved the coffin containing Llywelyn’s body by river to the newly built abbey at Maenan. During the dissolution of the monasteries the coffin was moved for safe keeping to St Grwst’s church where it was forgotten about and was found covered with rubbish some 200 years later. it was then moved to this chapel in Llanrwst parish church. No one knows what happened to Llywelyn’s body. 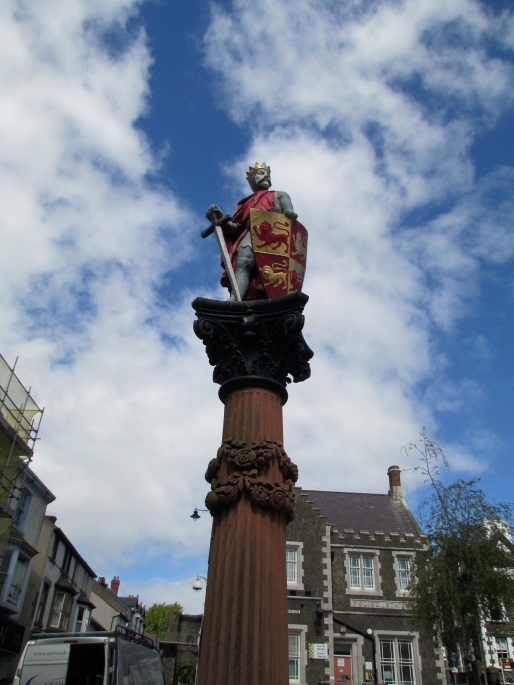 Statue of Llywelyn in Conwy. Obviously not contemporary. Also much smaller than it looks in this photo.

Llywelyn was later known as Llywelyn Fawr (Llywelyn the great). He was the most powerful Welsh Prince of his time and in many ways a serious threat to the English Crown. At this point Wales was still independent of England, although their princes swore featly to the English kings. Joan was sent to a country she didn’t know, whose language she didn’t speak, with a man she had never met before as a bargaining chip from John to try and quell the Welsh. Joan continued to be an important part of English and Welsh negotiations throughout her entire marriage. Joan occasionally acted as a mediator between the two and on one occasion was forced, through circumstance, to beg King John for leniency towards her husband.[1]  Interestingly Joan’s illegitimate birth was not the stigma to the Welsh that it had been to the Norman French. Illegitimate children were even allowed to inherit in Wales as long as their father acknowledged them. However Joan managed to obtain a papal decree in 1226 from Honorius III which declared her legitimate as neither of her parents had been married at the time of her conception, but it clearly gave her no right to the English throne.

One of the most controversial aspects of Joan’s marriage to Llywelyn was that she committed adultery with William de Barose in 1230. De Barose was found in her bedroom.  De Barose was hanged and Joan was placed under house arrest for twelve months, after which, according to the Chronicle of Chester, Llywelyn took her back and restored her to all her former positions and titles. [2] Their marriage seems to have been one of affection, not many men of the period would have ever forgiven a wife who committed adultery.  Llewlyn was certainly distraught when she died. A Welsh chronicle the Brut y Tywysogion described Llywelyn’s actions at Joan’s death in February 1237. It said “in honour of her [Joan] Llywelyn son of Iorworth had built there [where she was buried] a monastery for barefooted monks which is called Llanvaes in Mona”.[3] So this was one marriage that did seem to have worked emotionally as well as politically. Additionally tradition has it that when they stayed at their hunting lodge at Trefriw Joan found the steep climb to the church at Llanrhychwyn too arduous so in c. 1200 Llywelyn had a church built for her much closer to their hunting lodge. The Church of St Mary’s now stands roughly on the same spot and stain glass windows, not contemporary,  depicting Llywelyn and Joan can be seen in the church in Trefriw.

St Mary’s Church in Trefriw and the stain glass windows. Unfortunately I couldn’t get inside the church as it was locked when I was there.

Joan’s is one of the nicer stories of noble marriages of this time period. Even though she was traded like coin for an alliance and spent much of her marriage trapped between her husband and her father, her marriage itself seems to have been one of at least some affection. Joan also had the advantage of being a little older than some of the other daughters who were used to cement alliances, many were only young girls when they were sent off. Some were even raised in foreign courts. As harrowing as being sent to an alien land where you didn’t speak the language would have been Joan was dealt a better hand than than many of her contemporaries and that says something about the way these women were used during this period.

The next post will look at another noble woman whose marriage turned out for the better. Isabel de Clare was a great heiress and her marriage to William Marshal brought to prominence a man who would have an indelible affect on England.