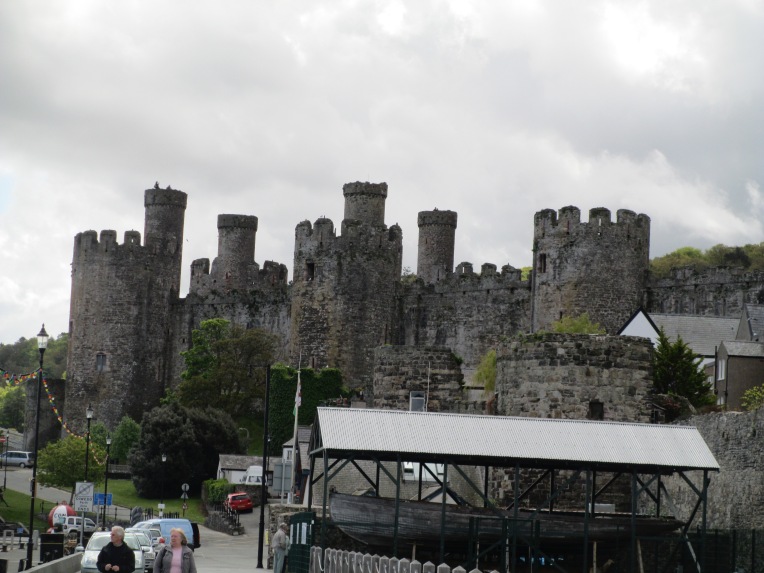 Conwy is the first I’ll be discussing of a series of castles built by Edward I in his domination of Wales. Conwy was built in 1283 and remains one of the most impressive surviving medieval fortifications in Britain.

The ring of castles Edward built around Wales, especially in the north, were constructed both to impose his authority on the area and to ensure that any expensive future rebellions was squashed. Edward used the towns and castles he built to import Englishness. He brought in English settlers and English laws and made the towns havens of the English. It wasn’t until the 1700s that the Welsh really had towns they could call their own, the Welsh at the time didn’t really live in towns because they tended to be a disparate agricultural community.

Edward I  took the Conwy valley in 1283 and very quickly began to erect a garrison town and the castle. By 1287 the castle was largely finished. This castle sits on a rock base which provided enough security that it was not necessary for Edward I to have the walls with in walls that are a feature of many of his other Welsh castles.

Edward lavished more money on Conwy than any of this other welsh castles, spending 15 000 pounds, an extraordinary sum for the time. He built the castle and the wall on the site of Aberconwy Abbey, one of the most important Welsh abbeys and the burial place of probably the most important Welsh Prince, Llywelyn the Great. Llywelyn’s body was moved by the monks and his sarcophagus can now be found at Llanwrst parish church.

Edward I was actually held at Conwy under siege by Madog ap Llywelyn in 1295, but the castle didn’t fall. Conwy was also taken by the forces of Owain Glyndwr in the 1400s.  Glyndwr came very close to taking Wales out of the hands of Henry IV, but in this particular case it was two of his kinsmen who took the castle. Rhys and Gwilym Tudor, yes those Tudors, took the castle through trickery. They waited till the garrison was at prayer and then, some stories say by pretending to be carpenters, snuck in and took the castle in 1401. They held it for months before it was traded back for funds for the rebellion.