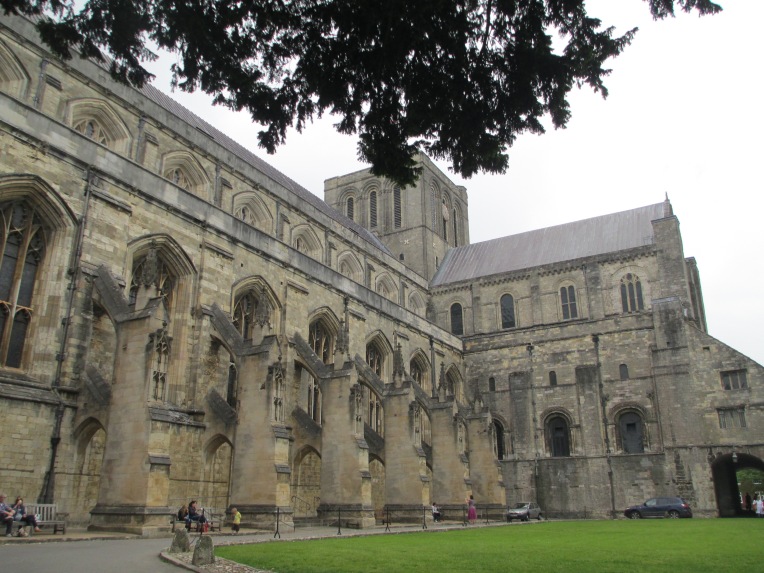 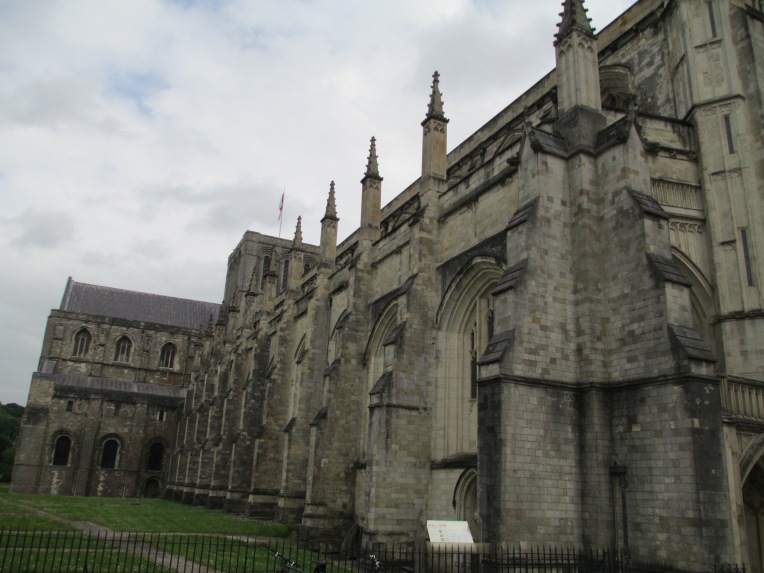 Winchester Cathedral has a long history. A Saxon cathedral was begun on this site in c. 648, but was slowly replaced by the Norman Cathedral and finally demolished in 1093 when the old and new building converged. You can see the outline of the original Saxon cathedral laid out below. 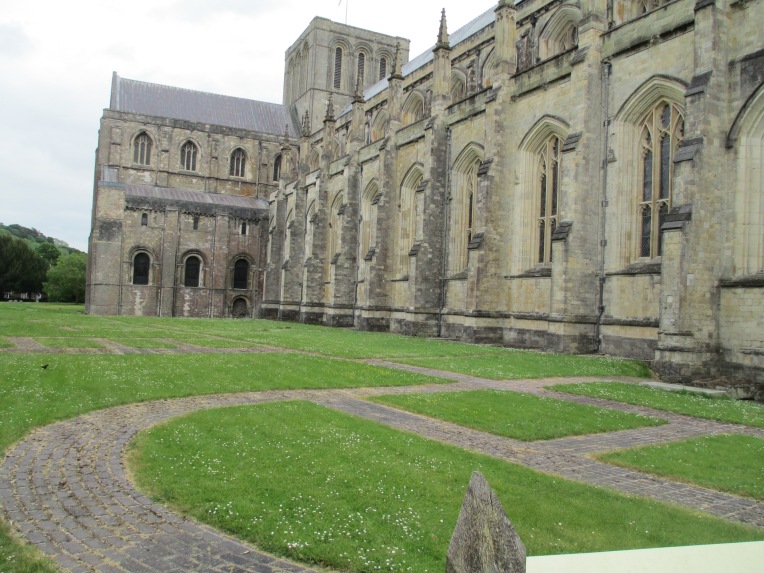 It is possible that there was the intention to later rebuild and extend the western structure in a more ‘modern style’ but the black death in 1348, which halved the population of Winchester and the population of monks, put a stop to any ambitious rebuilding plans. In the late 14th century the three west porches and the great west window were created to close off a cathedral that had been truncated by necessity. Henry IV and Joan of Navarre were married in the cathedral as were Mary Tudor and Phillip of Spain. Henry III may have been baptised there, he was born in the castle, and the ill fated Prince Arthur, the older brother of Henry VIII, certainly was.

Winchester Cathedral contains many fascinating and often surprising historical features and I thought it would be worth exploring a few. 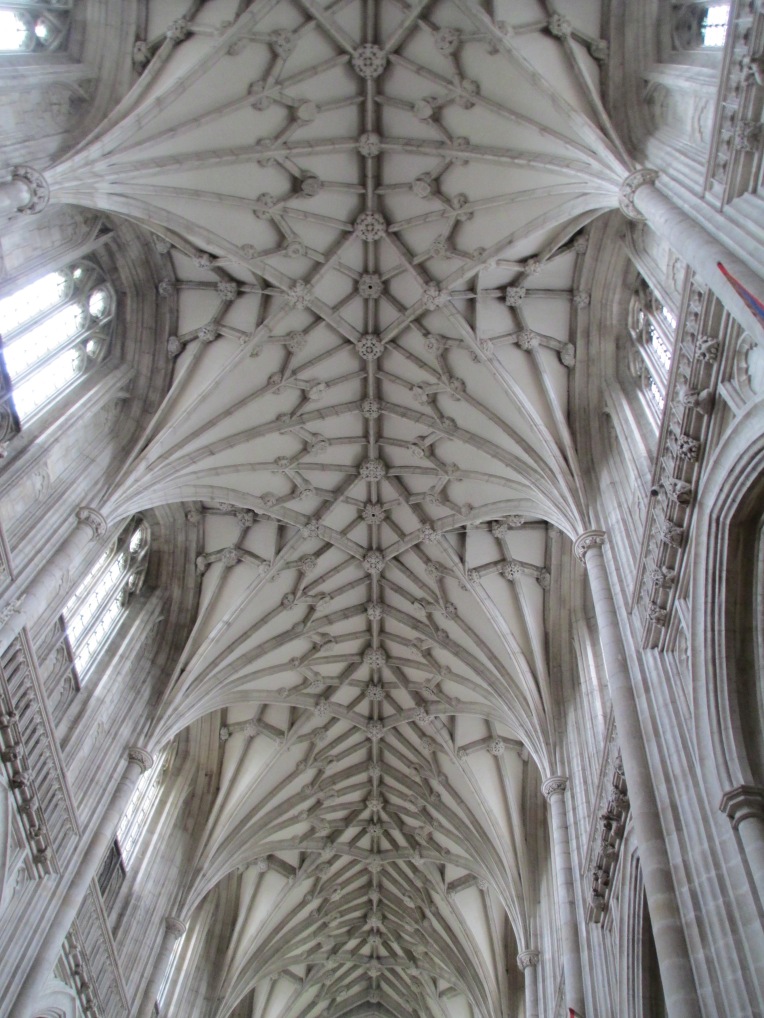 The romanesque style of the earlier cathedral can still be seen, specifically in the north transept (see below). The roof, in the Tudor style, in the photos below was inserted in 1819. The figure of Christ you can see in the first photo is by contemporary sculptor Peter Eugene Ball and was gifted to the cathedral in 1990. 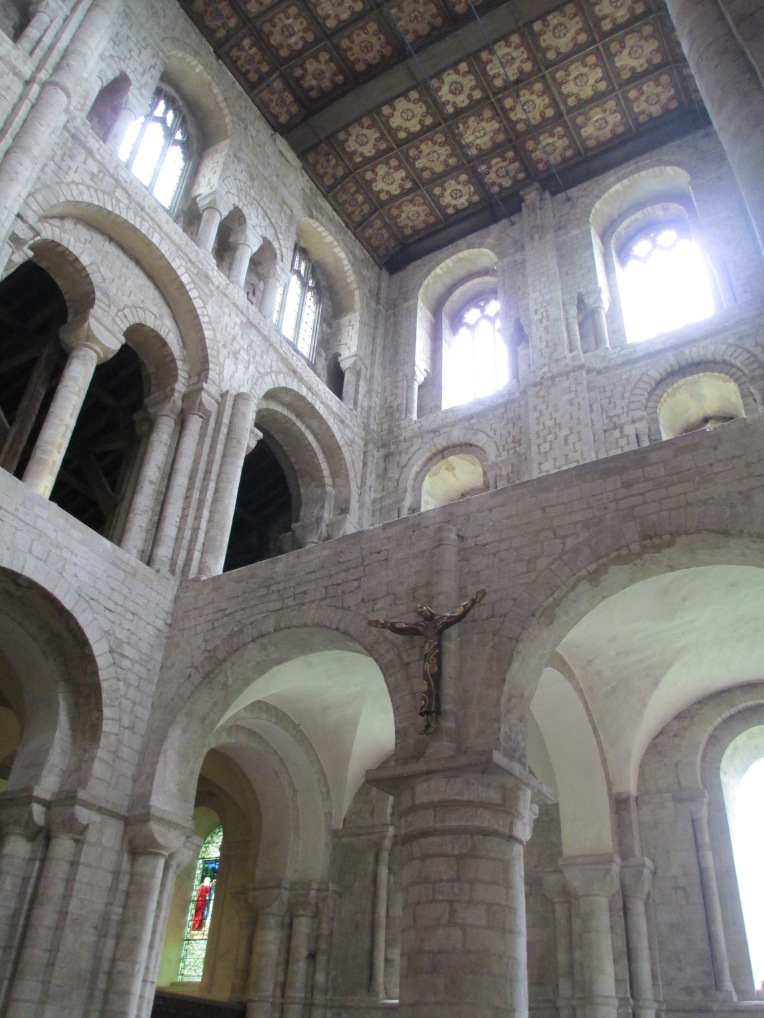 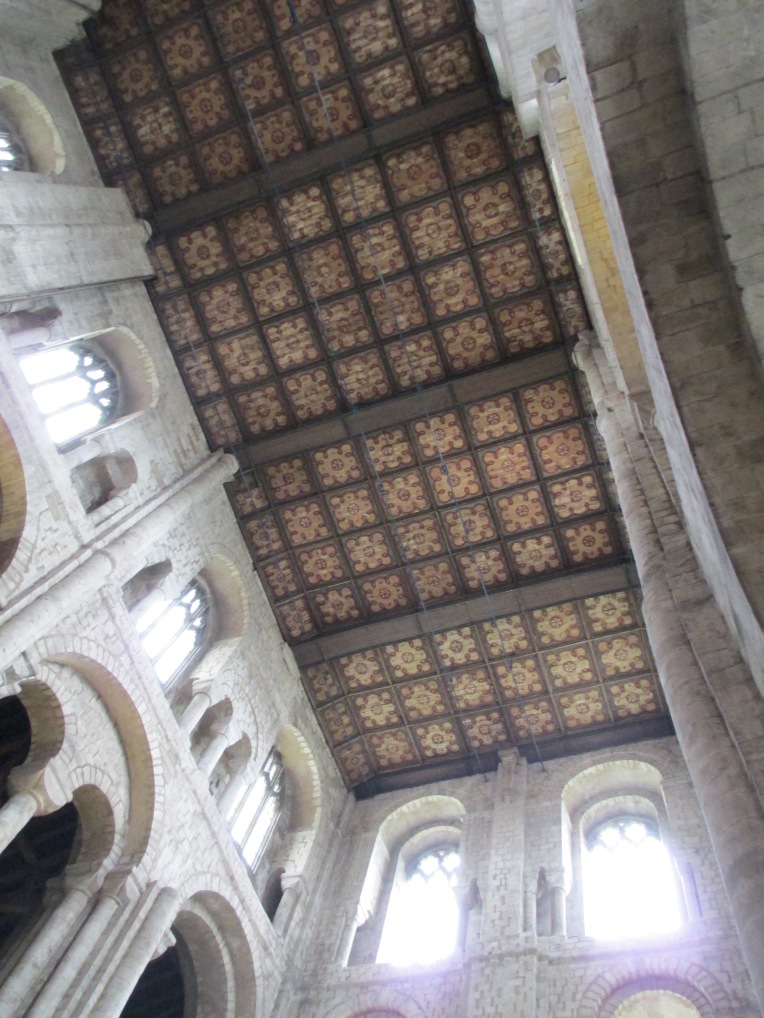 There are other remnants of the earlier style of the cathedral. In fact Winchester has a surprising number of exceptional survivals.

The Holy Sepulchre Chapel retains some of the finest 12th century wall paintings in England. They survived by chance because the vaulting was changed in the 13th century and the paintings were covered by plaster and the design was replicated on the new layer. These new designs did not survive, as is the case with the majority of wall paintings. It wasn’t until the 19th century, when some plaster fell, that the original paintings underneath became visible. In the 20th century modern restoration techniques allowed these paintings to be finally uncovered.  The paintings depict the deposition and entombment of Christ. 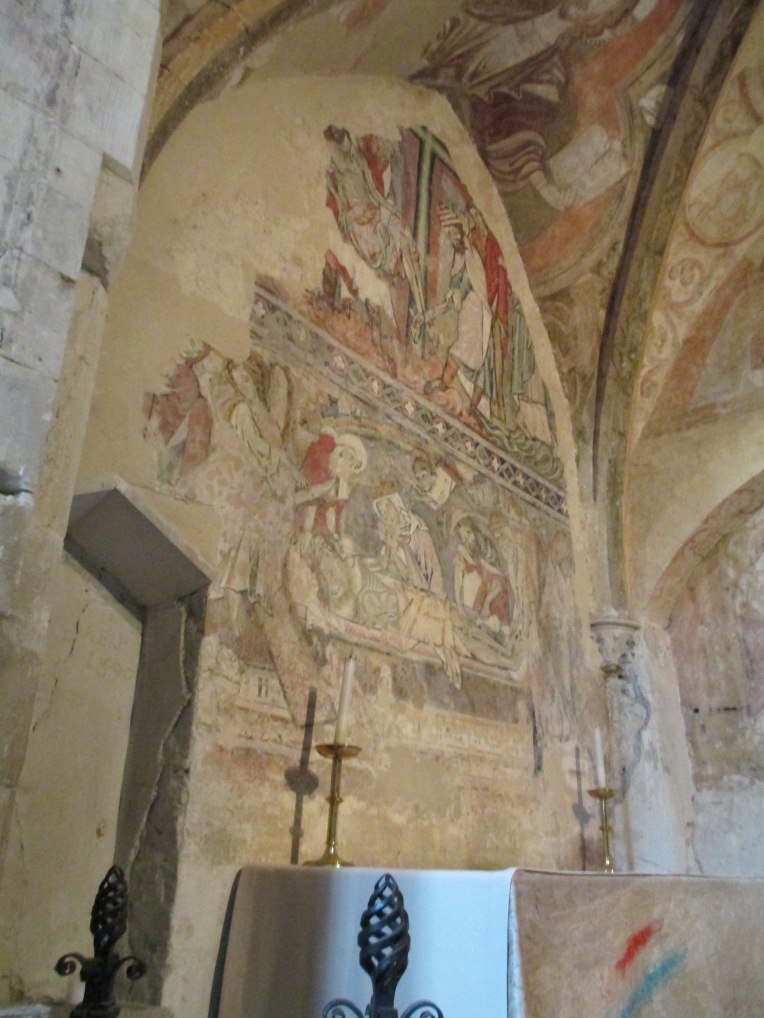 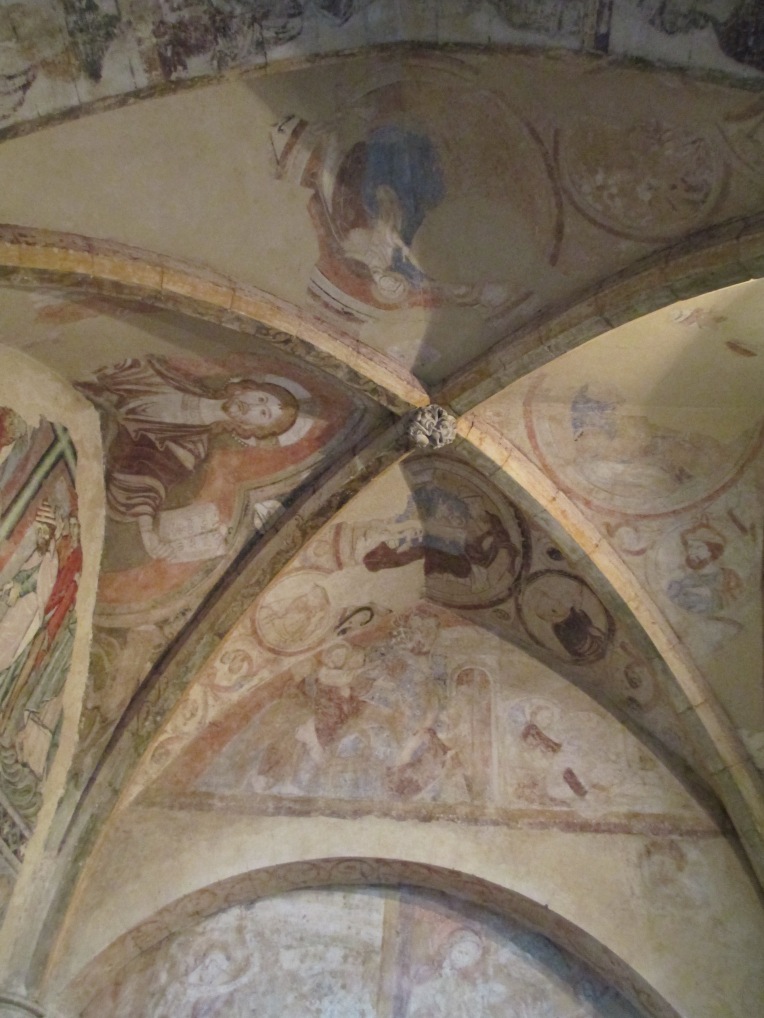 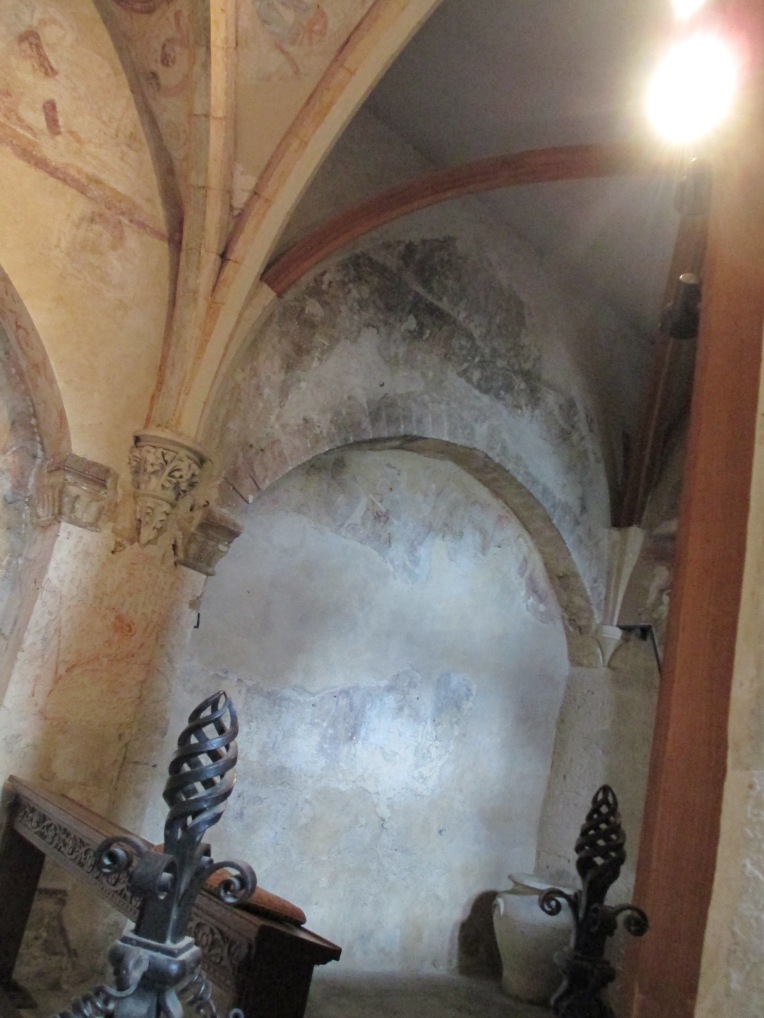 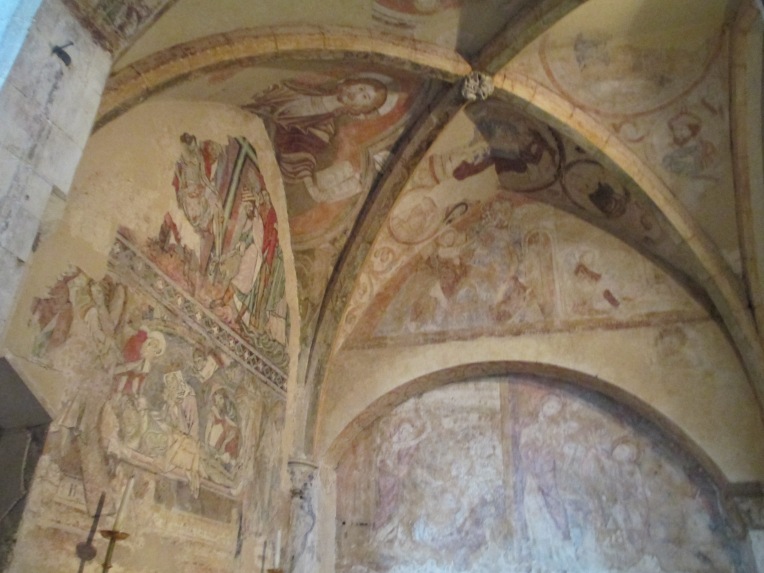 The Holy Sepulcher Chapel is not the only surviving medieval painting in the cathedral. Another is the ceiling of the Guardian Angels Chapel. It was painted between 1225 and 1220 and repainted between 1260 and 1280. 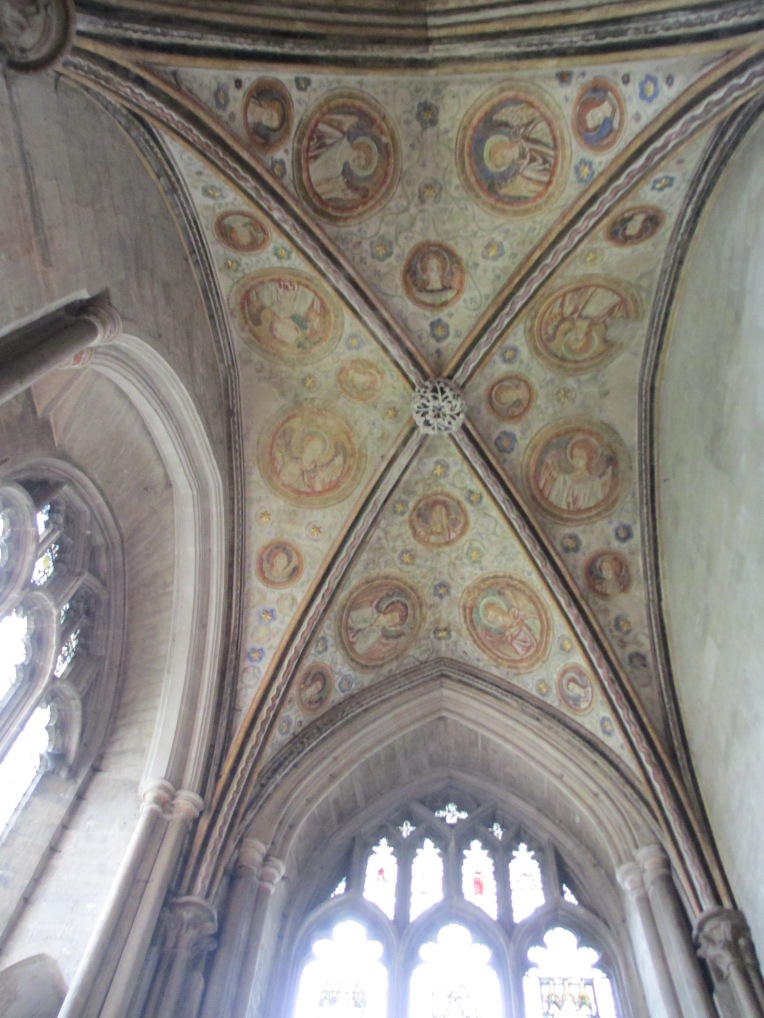 Another beautiful surviving element found in Winchester is the font. It dates to c.1150-1160 and is thought to be a result of the patronage of Henry of Blois, Bishop of Winchester.  It’s made of Tournai marble, which is in fact a dark limestone, and is carved with scenes from the life of St Nicholas. 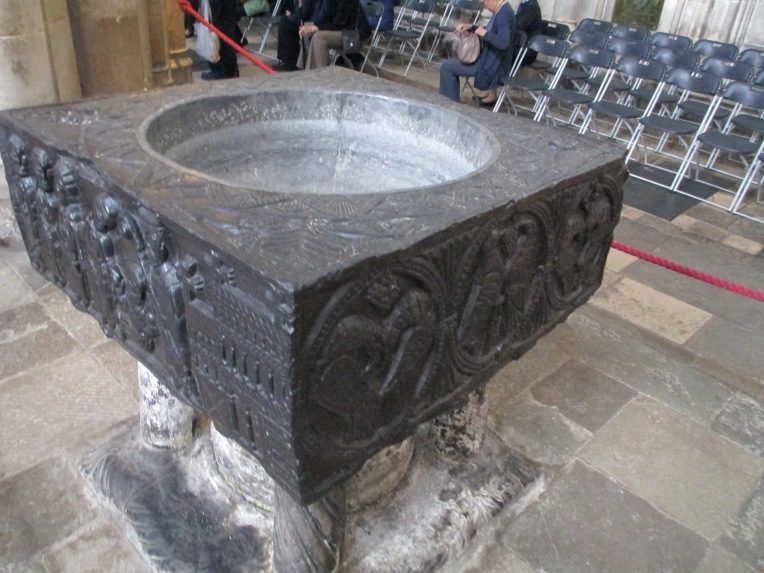 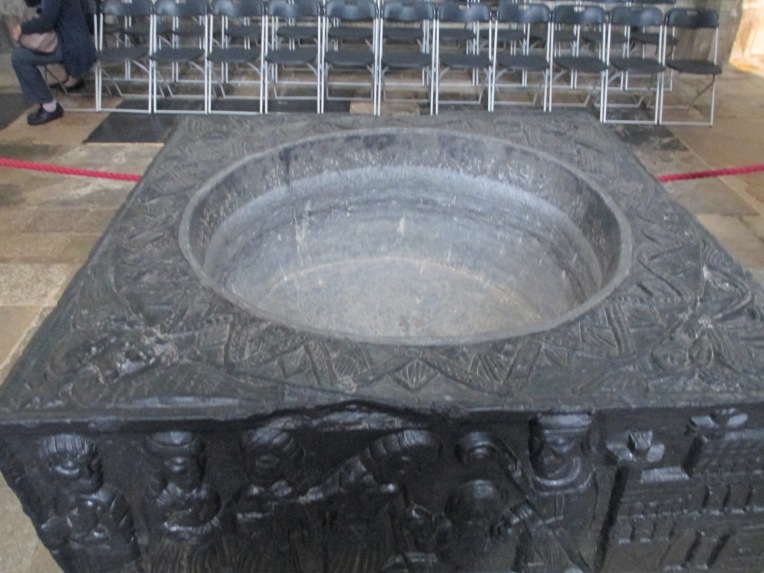 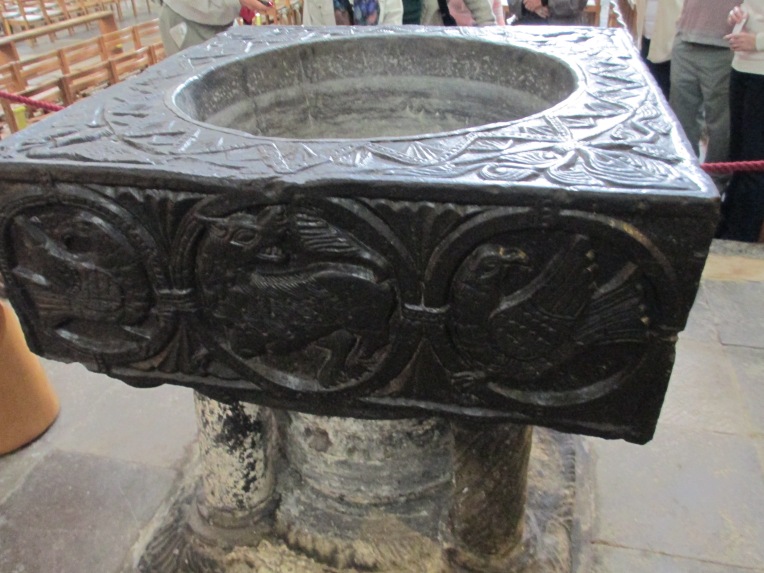 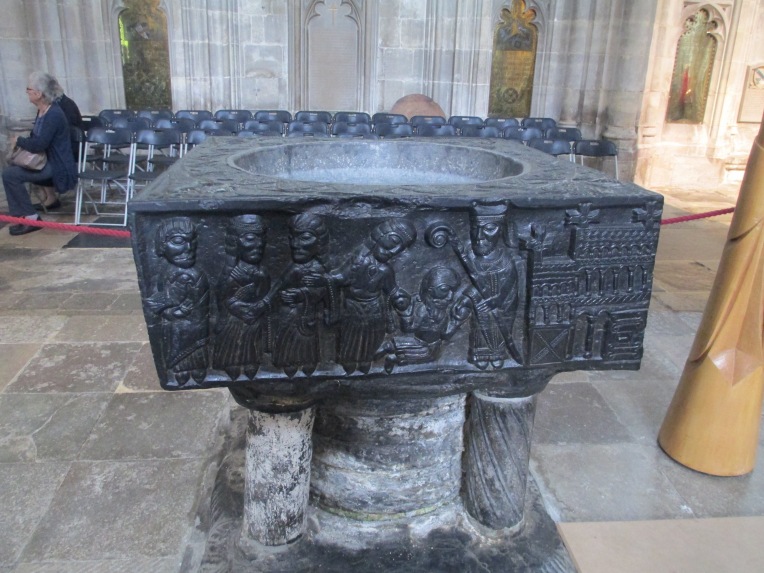 The scene you can see in the image above is thought to depict the story that St Nicholas slipped money into a house to stop a nobleman from being forced to put his daughters onto the street.

Henry of Blois, who probably commissioned the font, was also responsible for commissioning the Winchester Bible, a fantastically decorated illuminated manuscript dating to the early 12th century. It is four volumes and was worked on for twenty years by scribes and illustrators. Bishop Henry of Blois was the younger brother of King Stephen, and it is thought that he is buried in the cathedral. 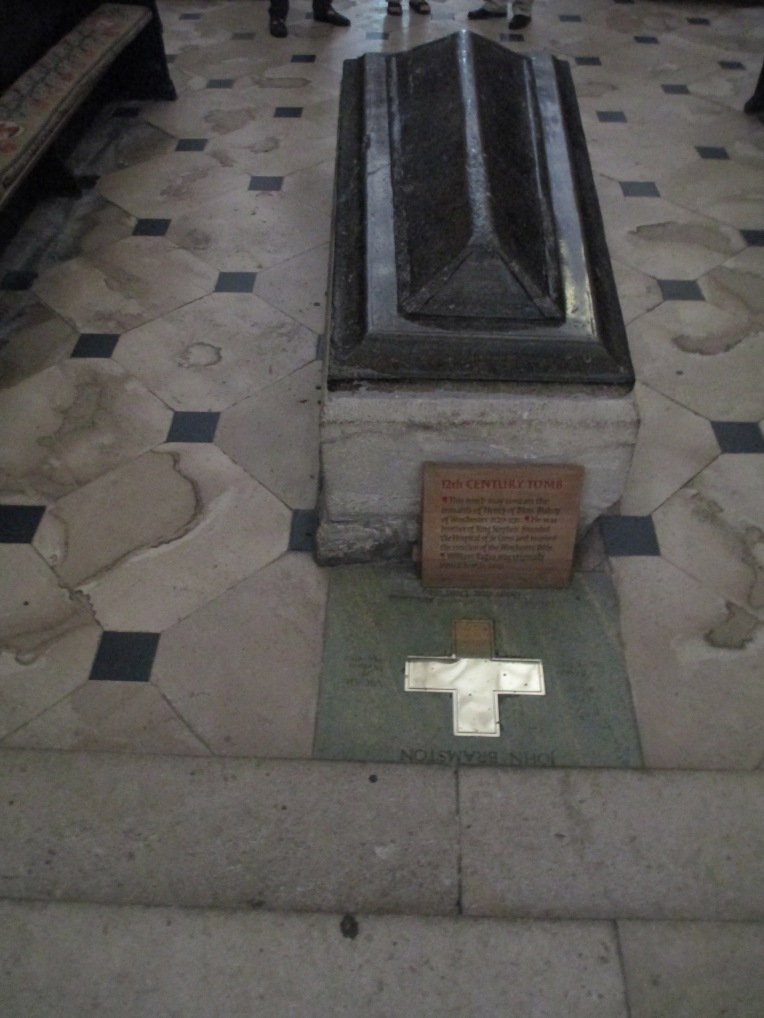 The above tomb was for many years thought to be that of William Rufus, but more modern scholarship has argued that it is in fact Henry of Blois. William Rufus’ remains are thought to lie in mortuary chests in the cathedral along with, probably, those of King Canute. 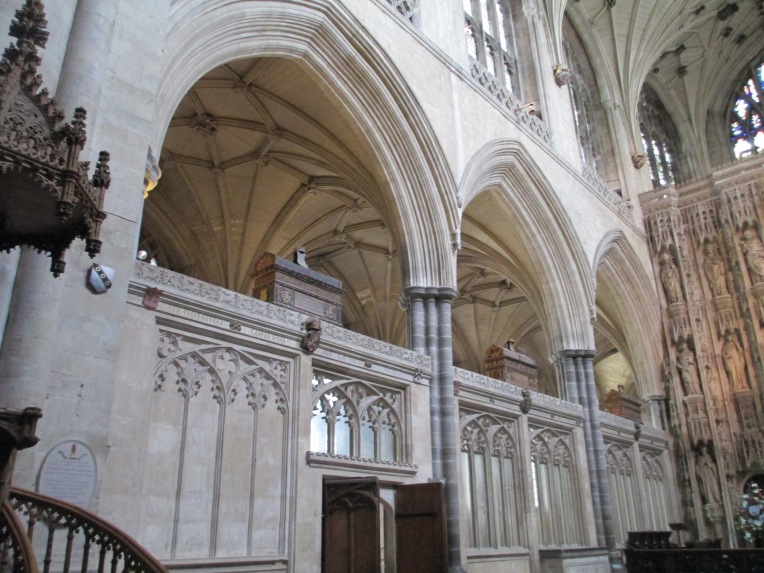 Winchester Cathedral is also the resting place of the remains of other important figures. These include St Swithun and Jane Austen. St Swithun’s shrine was destroyed by Henry VIII’s men in 1538, but a modern memorial now stands in its place. It was installed in 1962 on the 1100th anniversary of the saint’s death. 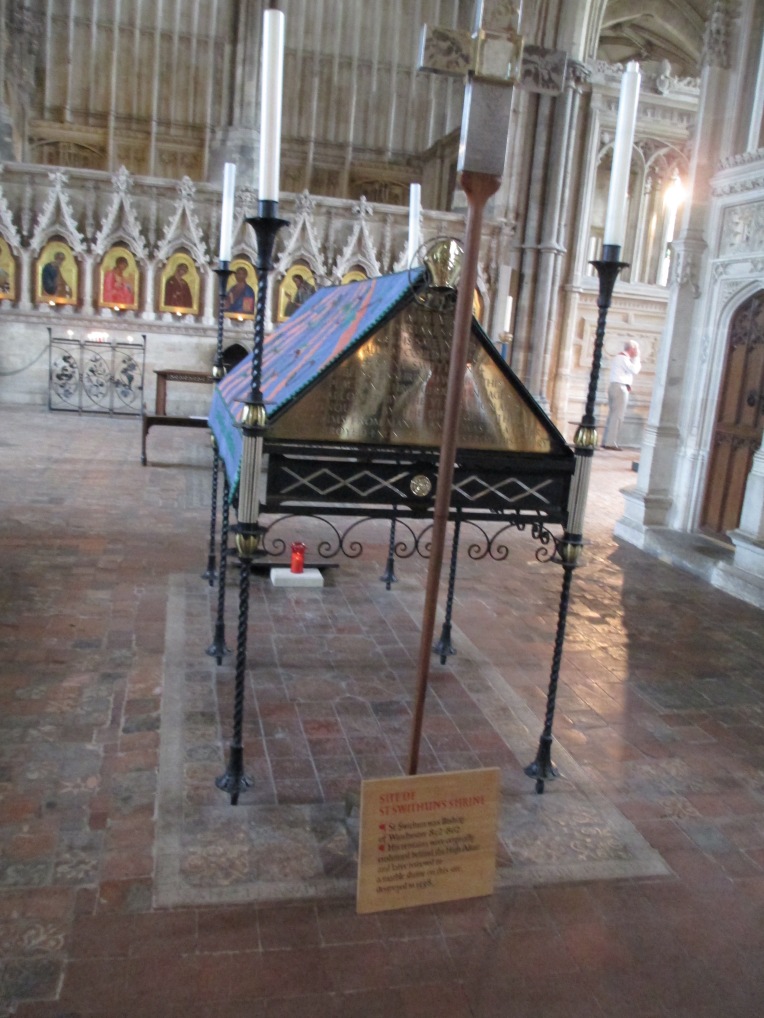 Jane Austen was brought to Winchester in May 1817 by her brother Henry and sister Cassandra in the hope of obtaining help for her fading health. Sadly they were not successful and Jane died in Winchester on July 18th 1817. Her brother Henry used his contacts to have her buried in the cathedral. 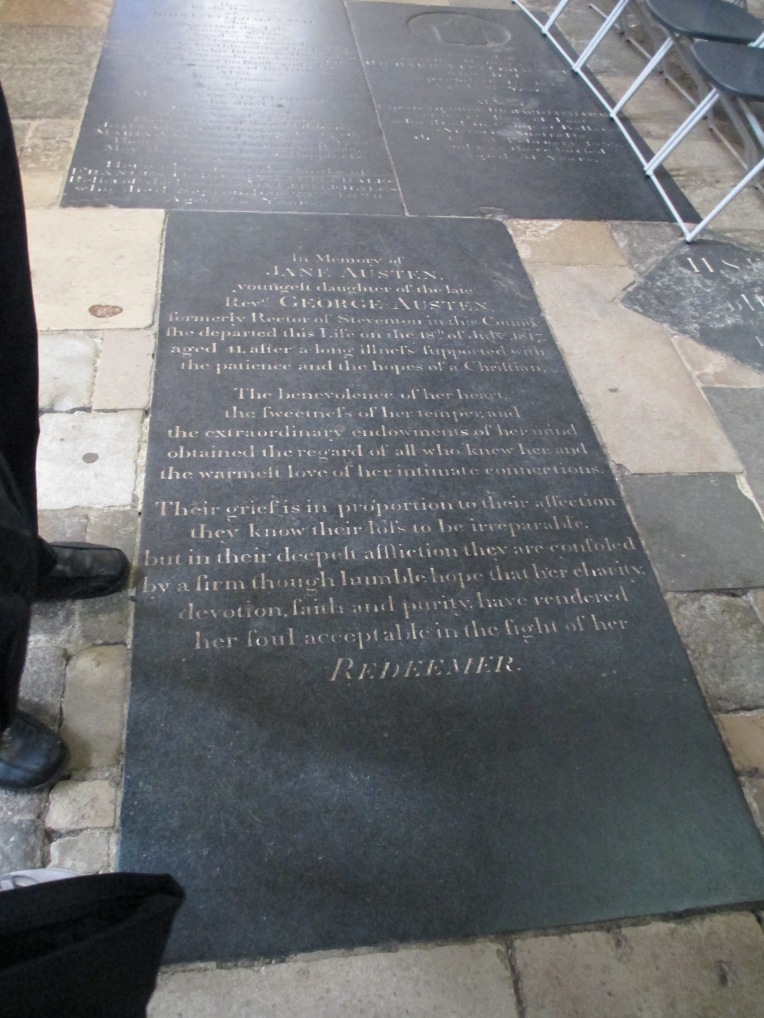 Some of the surviving tombs in Winchester can be found on a remarkable expanse of tiled floor. Medieval tiles don’t often survive in large quantities and I have written about some surviving Welsh tiles here. The tiles in Winchester date to the 13th century and carry a number of designs from the heraldic to the purely decorative. They are the largest area of medieval tiles to survive in England. 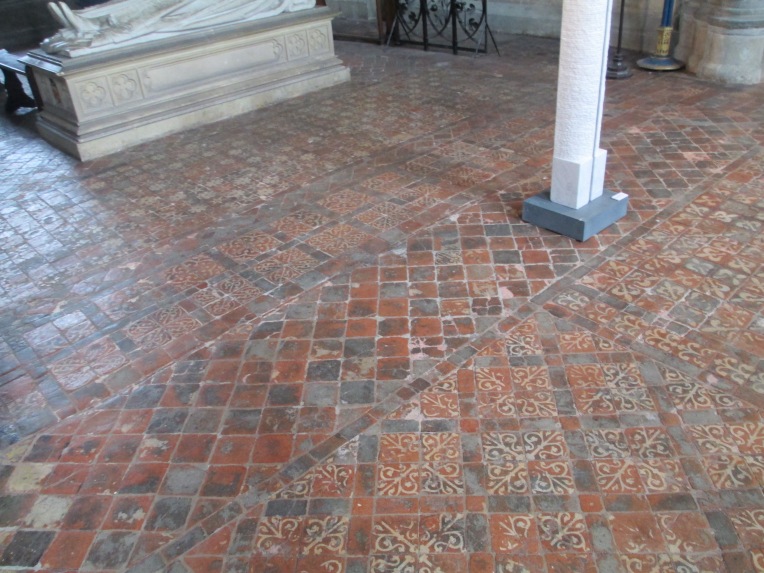 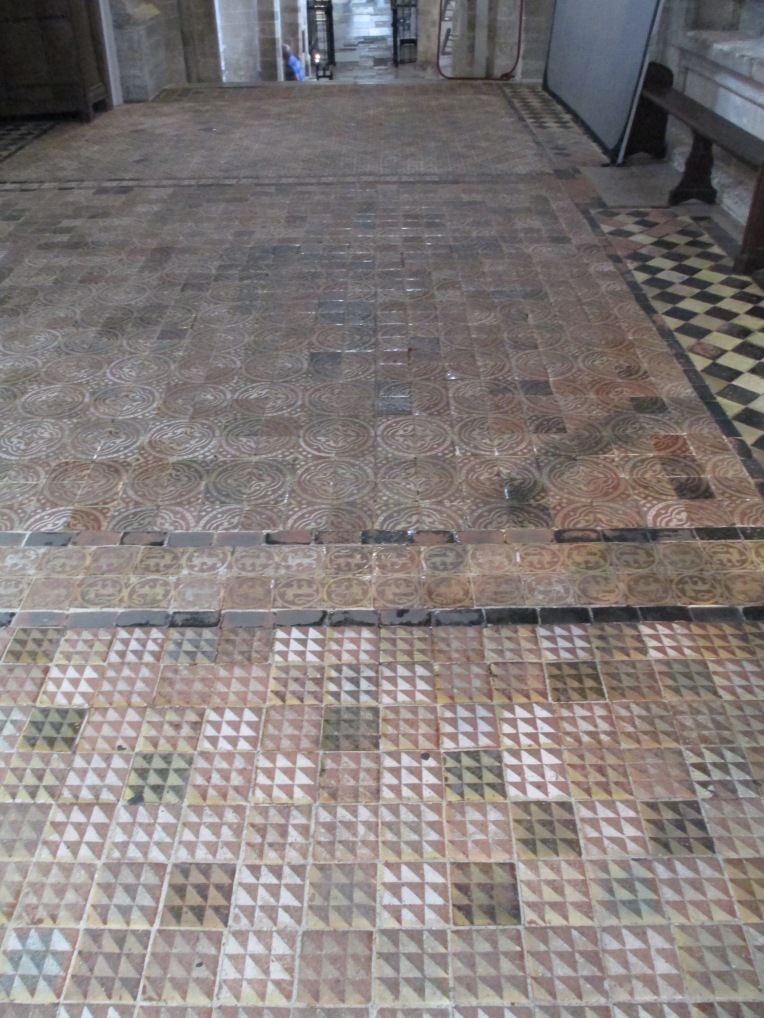 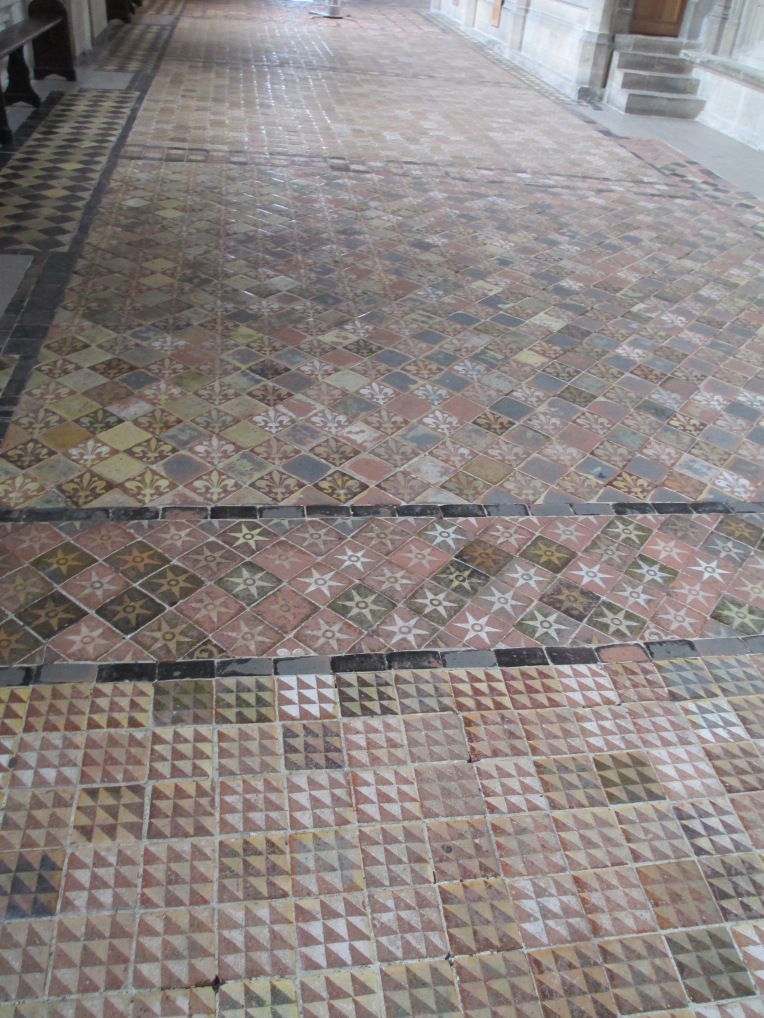 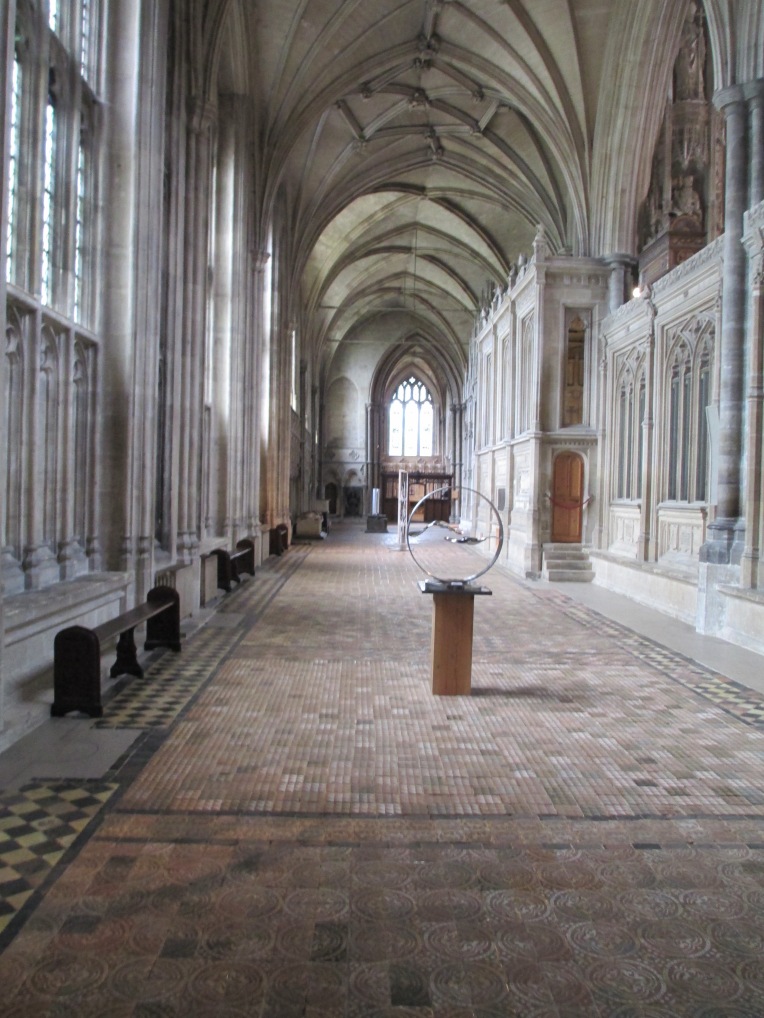 The medieval tiles border an exceptionally interesting area of Winchester; the crypt. Unlike most cathedral crypts Winchester’s has never really been used to house bodies or monuments. This is due to the fact that since the cathedral was built the crypt has flooded regularly. Today you can see the contemporary sculpture Sound II by Antony Gormley reflected in the flooded crypt. It is a surprisingly haunting place. It feels in an odd way as if the silence has seeped into the stone. 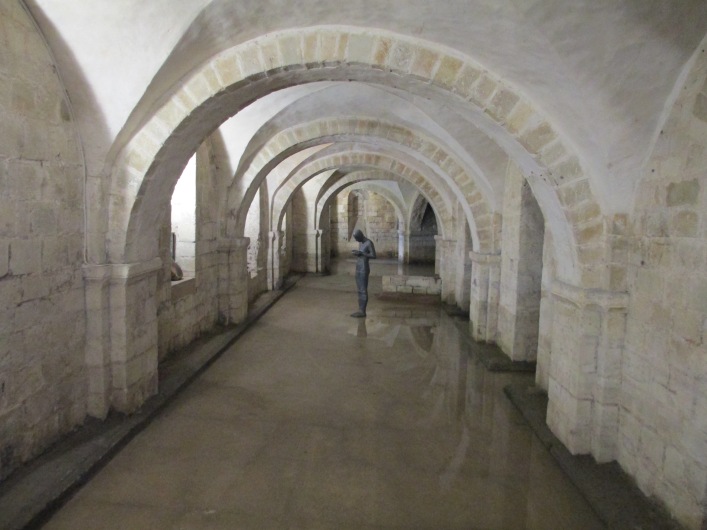 Winchester Cathedral’s survivals from the early medieval period are all the more remarkable because it has suffered attack on a number of occasions.

Henry VIII’s men for example destroyed all the sculptures depicting the cathedral’s benefactors, old testament saints and the crucified Christ which was originally populated the Great Screen. The Screen was constructed in the late 15th century. The sculpture you can see on it now dates to the 19th century. 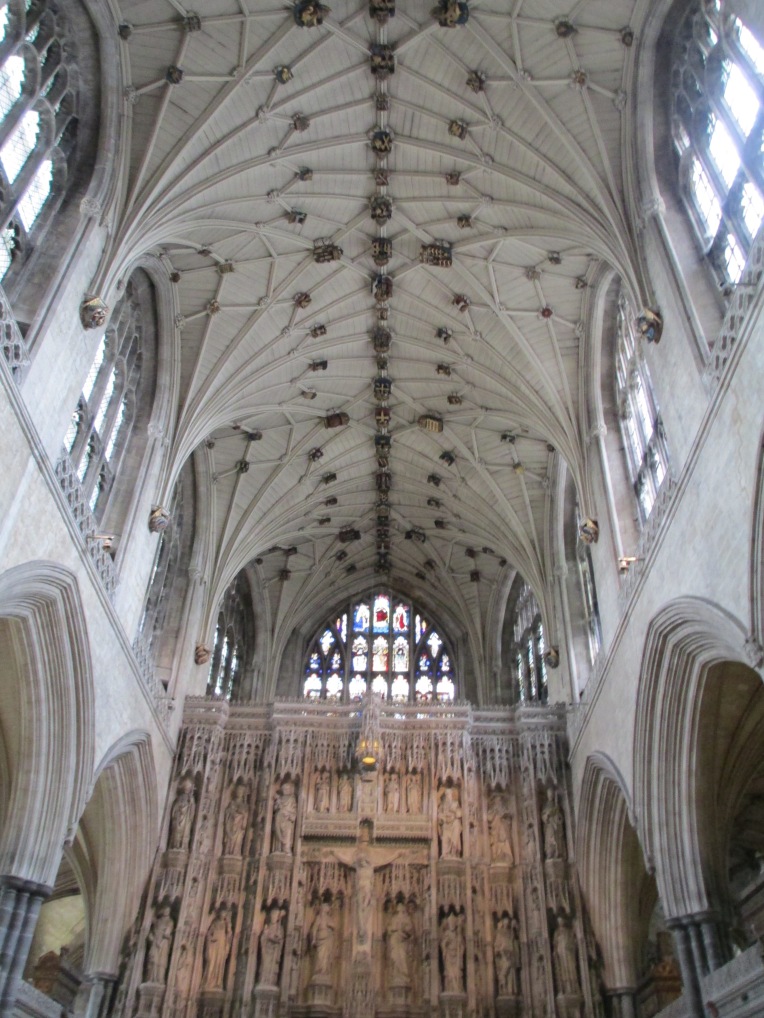 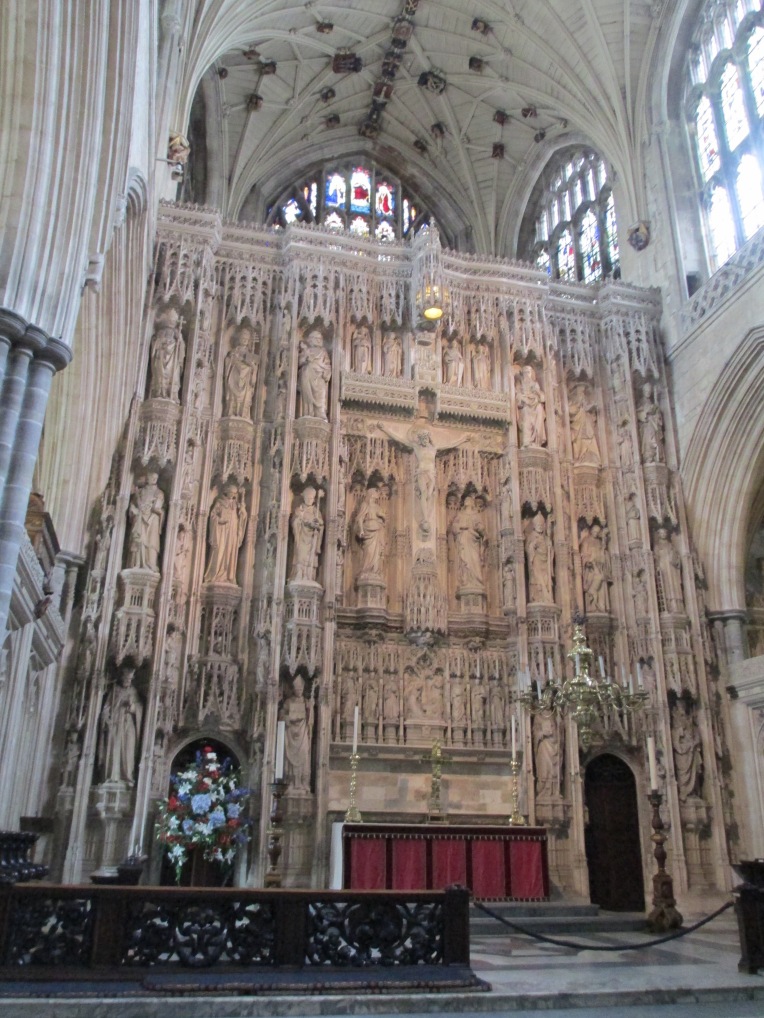 The Puritans also did extensive damage to the cathedral when they came through Winchester. They stole all the treasures and used the bones of kings and prelates to break the main windows. The west window was, unusually, not reconstructed with a new image or a replica of the destroyed image. In fact the remnants of the broken glass were used, creating a fascinating mosaic affect which survives today. 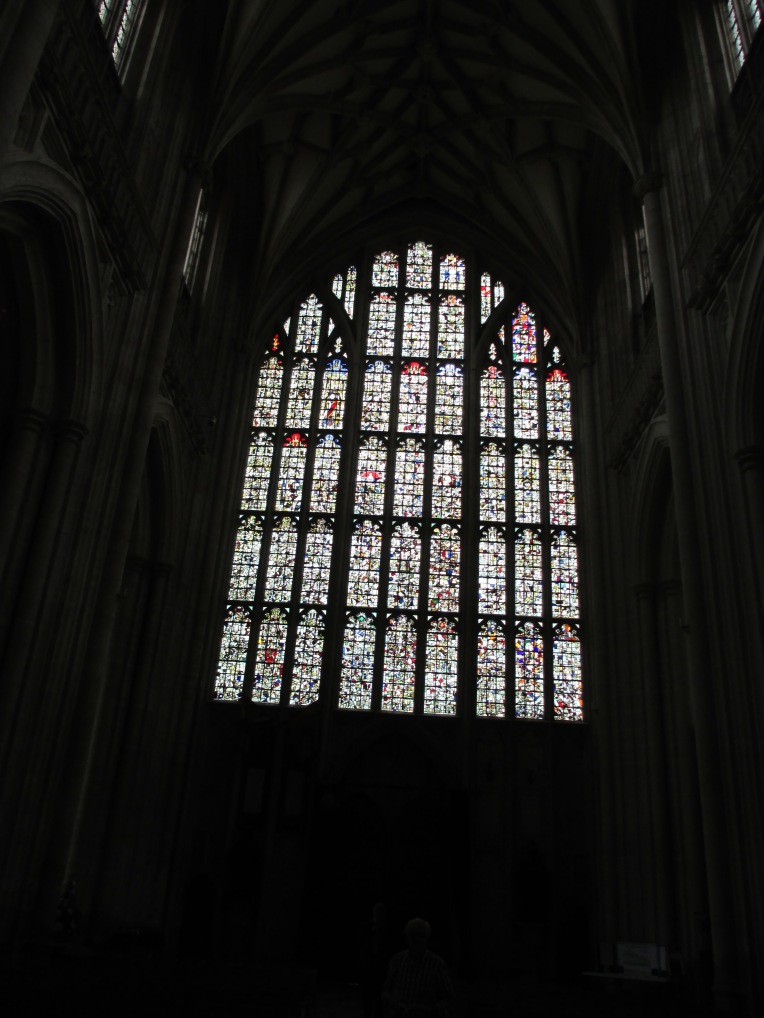 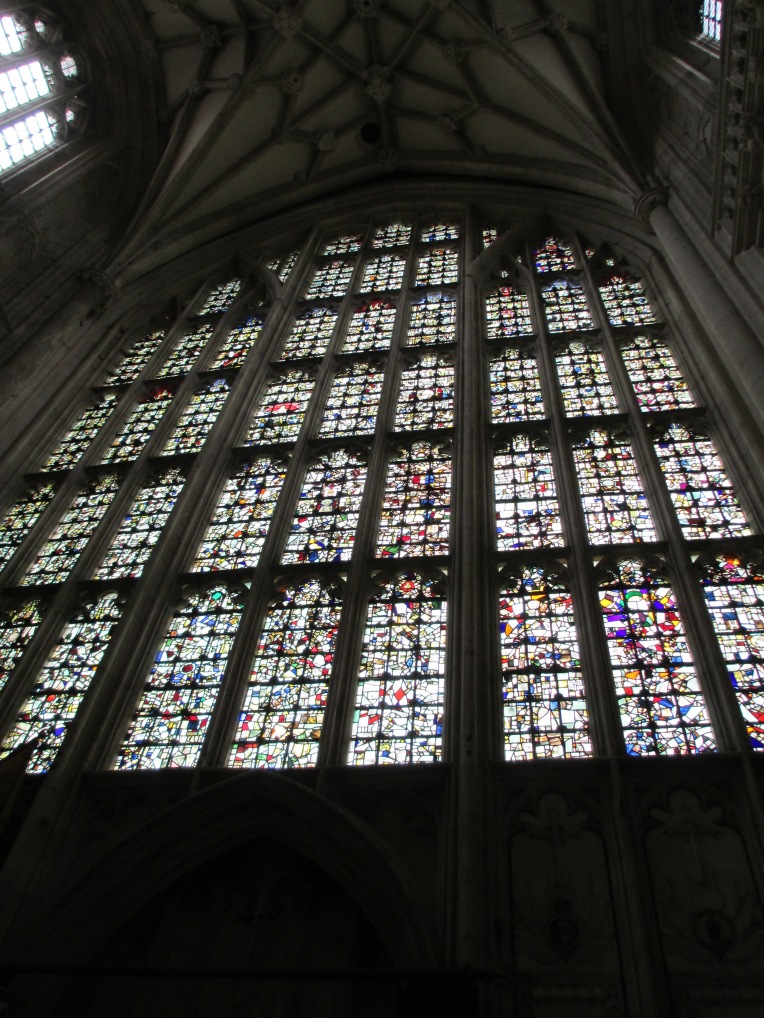 These are by no means the only treasures of Winchester Cathedral. It is well worth a visit, if possible, to see these and the other treasures. The Winchester Bible is worth it alone, unfortunately photos aren’t possible. Even after having visited a significant number of cathedrals Winchester remains one of my favourites largely because it holds so many remarkable survivals of an earlier time.