I found this church by accident on a recent trip to Geelong and it’s a really lovely example of Victorian Gothic.

Geelong is in Victoria Australia about an hour out of Melbourne. It was founded in 1838 when it was laid out and officially proclaimed. Its existence is due to the need for a depot for all the squatters who were pouring into Victoria. The first land sales were held in 1839 with the Wollpack Inn opened in the same year.

The current Basilica stands on what was known as Church Hill and commands the highpoint of Geelong.

The church that can be seen today has humble origins. To begin with Catholics in Geelong, or Corio as it was often known, did not even have a priest. Father Bonaventure Geoghegan became the first priest for the St Benedict’s District, of which Geelong was part, in 1839. 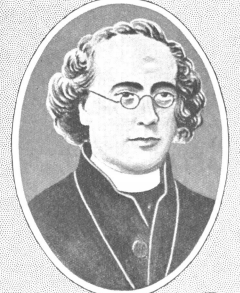 Geoghegan was born in Dublin and celebrated his first Mass in an open roofed building in Melbourne on May 19 1839. He baptised the children who had been born in the four years of Melbourne’s existence. He was the only priest to care for Catholics in the whole of the existing area of Victoria. As this was such a significant task Geoghegan was given an assistant, curate Richard Walsh. Then after 12 months, when Walsh was moved to Norfolk Island, Michael Ryan was assigned. He was described by Vicar General Murphy from Sydney as “a very well disposed young man although at times a little hasty & inclined to have too much of his own way.”

It was Ryan who was assigned officially to Geelong in September 1841. Two days after his arrival, on the 8th of September 1841, Ryan celebrated what would have been the first Mass in Geelong. Under Ryan’s watch a foundation stone was laid for the beginnings of a church for the Catholics, but it wasn’t to be for Ryan and Geelong as Ryan was recalled to Sydney in October. Even without Ryan there Geoghegan continued with the plans for a church for Geelong. However progress was slow especially because it wasn’t until 1842 that Geelong again had the benefit of the resident priest. On April 13 Father Michael Stephens celebrated the first catholic marriage in Geelong. Later in 1842 the first catholic chapel was finally completed. It was a modest building made of paling about 30 feet by 20 feet and covered by a shingle roof. A far cry from the current church.

By 1846 the need for a new church had become very apparent. The census of that year showed 1003 catholics in the County of Grant which the small church serviced. The priest at the time, Richard Walsh again, set out on a campaign for the building of a permanent church. After fundraising and other efforts the foundation stone was laid on the 19th of August 1856 by Father Geoghegan.This church was opened on October 6th 1847  it was called St Mary’s and was later described…

“It was a  pretty little church built of very bad Barrabool stone. It soon began to show signs of decay, and the weather side had to get three coats of thick paint in ’53 to preserve it from the effects of frost and rain”

By 1854 the capacity of St Mary’s was very strained,the census of that year showed 3797 catholics in Geelong, and it was resolved that a new church was needed.

The first stone of the present church was laid by the Most Reverend James Alipius Goold 1st Bishop of Melbourne on the 15th of June 1854.

The nave was completed and  opened for worship, again by Bishop Goold,  on the 4th of February 1872.

Daniel Mannix, Archbishop of Melbourne,  consecrated the completed church including spire, on the 16th of June 1937.

Statue of Daniel Mannix outside St Patrick’s Cathedral in Melbourne.

Even before the spire was completed the church was eliciting extravagant praise.

“It exhibits an edifice of colossal cathedral proportions, such as one might expect to find in the episcopal city of some ancient Catholic continental nation, but which excites astonishment when associated with an antipodean town of yesterday… Even in this incomplete condition, the building is the most conspicuous, commodious and elegant ecclesiastical edifice in the town.”

The church was based on the 13th century gothic style. The central tower rose to a height of 100 feet above the ground and was capped with 8 crocketed pinnacles. These formed the base of the spire which rose another 98 feet into the air before terminating with a 12 foot high cross. The top of the cross was 210 feet above ground. The spire was built from inside without the use of external scaffolding. 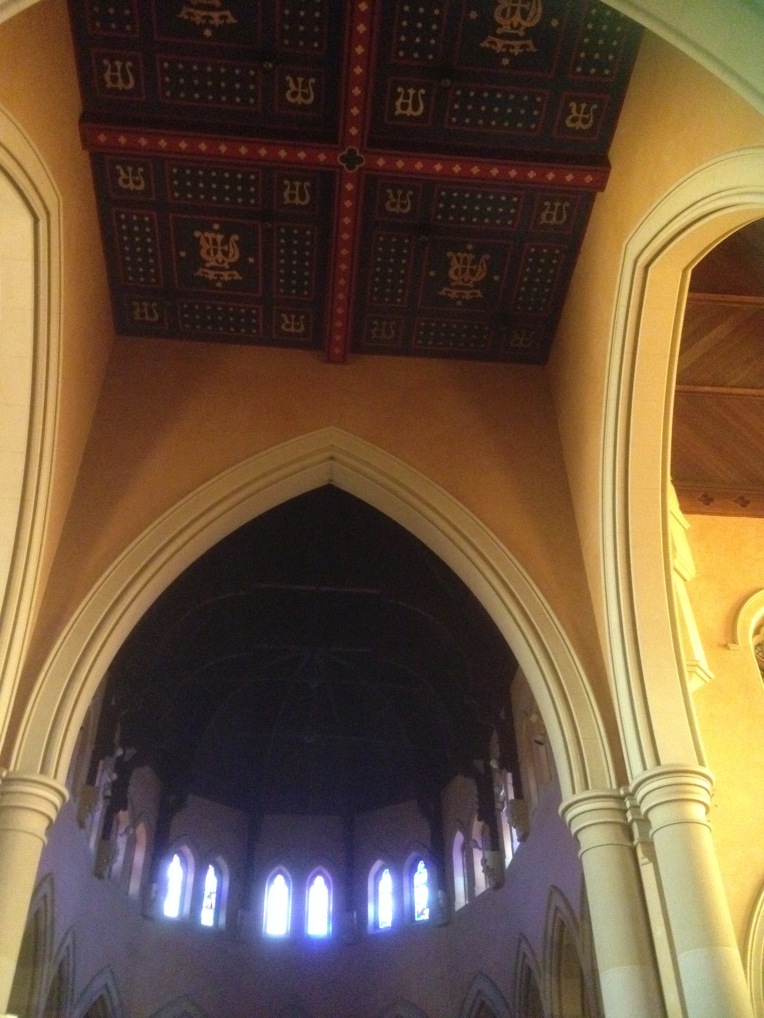 Ceiling below the spire.

The Spire, you can see the cross up the top.

The total length of the church was 220 feet, the distance between the transepts was 126 feet and the nave with side aisles was 14 feet 6 inches wide. The high altar was made of Verona marble. 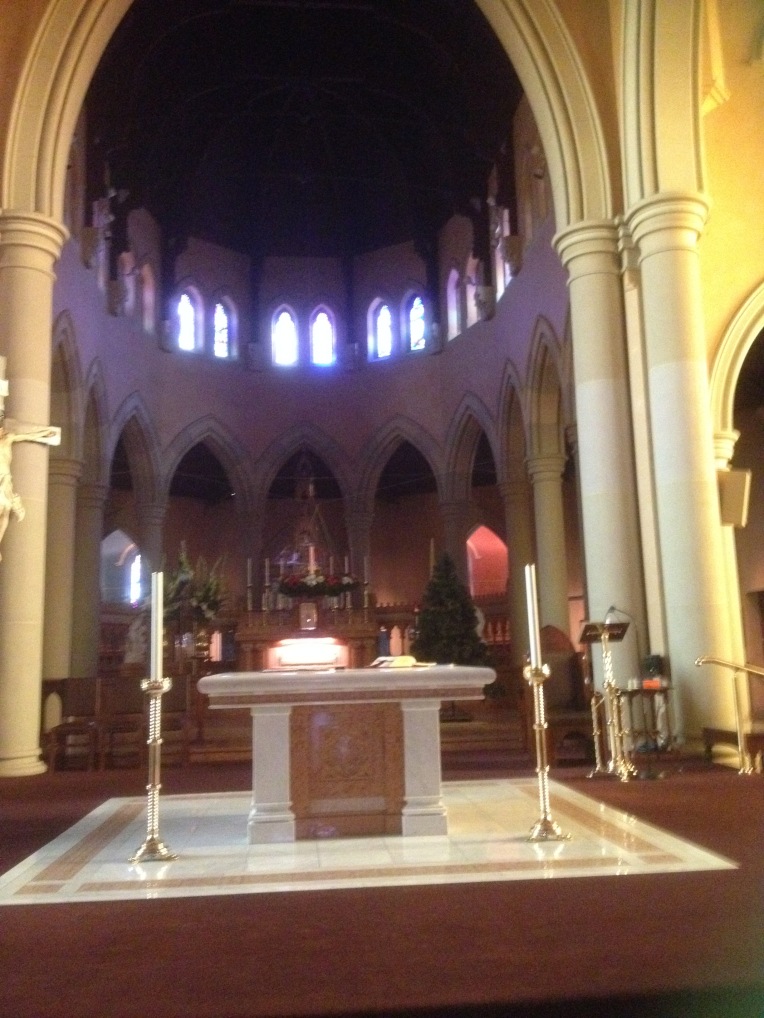 The high altar, although this is modified from the original version.

Although it was without doubt a magnificent building the church ran into problems in the 1960s as it was already beginning to age. The foundations on the western end had to be underpinned to stop subsidence and 560 stone crockets had to be removed from the spire because they kept breaking off, damaging the slate roof, causing leaks and threatening anyone walking too close to the church. Major restoration work was also undertaken in the 1980s.

In 2004 the 150th anniversary of the church was celebrated and at the anniversary Mass Archbishop Dennis Hart of Melbourne announced that the Vatican had designated St Mary’s as a Minor Basilica. One of only five in Australia.

These are the conditions for the granting of Minor Basilica status according to The United States Conference of Catholic Bishops.

“1. A church for which the title of basilica is proposed must have been dedicated to God by a liturgical rite and must stand out as a center of active and pastoral liturgy, especially through celebrations of the Most Holy Eucharist, of penance, and of the other sacraments, which celebrations set an example for others on account of their preparation and realization according to liturgical norms and with the active participation of the people of God.

2. To further the possibility of truly carrying out worthy and exemplary celebrations, the aforesaid church should be of an appropriate size and with a sufficiently large sanctuary. The various elements required for the liturgical celebration (altar, ambo [lectern], celebrant’s chair) must be placed according to the requirements of the restored liturgy (cf. General Instruction of the Roman Missal, nos. 288-318).

3. The church may enjoy a certain renown throughout the diocese, for example, because it has been constructed and dedicated to God on the occasion of some particular historical and religious event, or because the body or significant relics of a saint are reserved in it, or because some sacred image is there venerated in a special way.

The historical value or importance of the church and the worthiness of its art are also be considered.

4. So that, as the liturgical year progresses, the celebrations of the various seasons may be carried out in a praiseworthy manner, a fitting number of priests is necessary; they are to be assigned to the liturgical and pastoral care of the church, especially for the celebration of the Eucharist and penance (there should also be an appropriate number of confessors who at stated hours are available to the faithful).

In addition, a sufficient number of ministers is required as well as an adequate schola cantorum, which is to encourage the participation of the faithful with sacred music and singing.”

So the awarding of this title to St Mary’s is very much an acknowledgement of its importance both to the history of Victoria and to the people of Geelong.

It is a really beautiful church. Even if you are completely non religious as I am, the majesty of St Mary’s must be appreciated.

St Mary’s from the front.

Unless otherwise stated by links the photos are mine.

@manchester.unity.building Unity tour update- amazingly deco interiors, most complete deco boardroom in the world and the first escalator in Victoria (60 000 people visited the ‘magic steps’ when they opened). The Chicago gothic tower was once the tallest building in melbourne