During a recent trip out to Western Victoria in the Wimmera region, to do some unrelated research, I noticed two horse troughs in separate towns that had the same inscription. It read that they had been donated by Annis and George Bills. I was intrigued so I did some research on Trove and I found there is actually a very interesting story behind them. 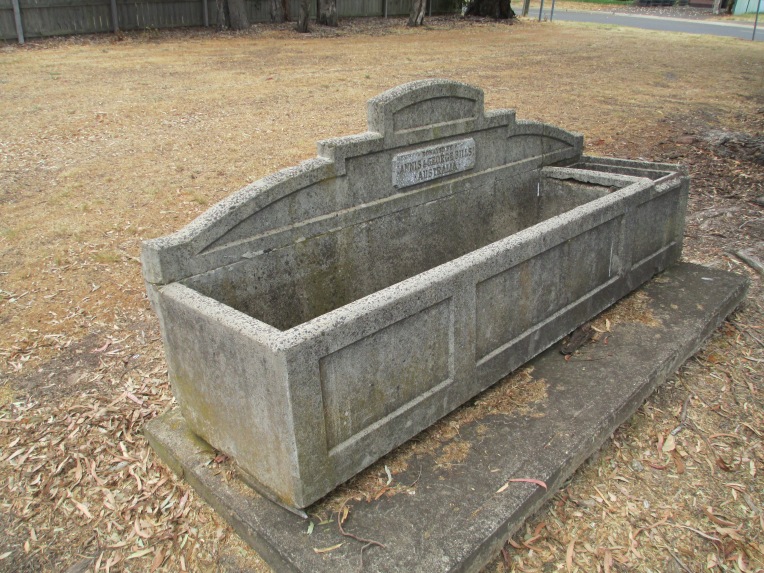 These horse troughs are the result of an interesting will and testament and can be found all over Victoria and New South Wales. George Bills made his money out of mattresses, first in making them and then in creating and patenting machinery to weave them. His father, who was a naturalist, came to Australia in the 1800s and, as the Horsham Times described it in 1935, “his heart ached to see the sufferings of dumb animals.” This was a concern that he passed on to his son George who also associated himself with the society for the protection of animals in England, New Zealand and Australia. George’s wife died before him and they had no children so he decided to make provision in his will for the future welfare of animals. The residue of his estate, after several personal bequests, was set aside to provide free memorial horse troughs the length and breadth of the British Empire. Towns applied for them to the trust and many such as Horsham actually have more than one. George died in 1927 and approximately 86 000 pounds was left for the provision of horse troughs. Each was made to the same design and carried the inscription ‘Donated by Annis and George Bills Australia.” By 1937, according the the Adelaide Advertiser, the trust had set up more than 400 horse troughs in Victoria and were expanding to New South Wales.

Sometimes they were for more than horses though and issues could arise, as Dubbo found in 1946. In this particular case dogs and humans were catered for as well as horses. Unfortunately the position of the human’s drinking fountain was problematic. As the Dubbo Liberal and Macquarie Advocate said.

“Unfortunately, lack of foresight was shown in the placing of the adjunct for the public. It is immediately over the small concrete basin for dogs, and at the end of the horse-trough. After drinking, horses have been seen slobbering over the faucet, and dogs licking it.”

The drinking faucet was thankfully moved.

The Dubbo paper also adds the interesting detail that the activities of the trust lapsed during the war period, but began again afterwards, which was when Dubbo applied for its second horse trough with the subsequent problems.

I just think this is a fascinating little piece of history. So far I’ve only found two of the troughs, as I wasn’t really looking for them, but if anyone else happens to see one that has survived in their town I’d love to know. I’d also be fascinated to find out if they are only present in Australia or whether George’s bequest did indeed cover the length and breadth of the British Empire.

The photos are mine.

After a little more investigation I have found this wonderful blog that has lists of the horse troughs. These obviously aren’t as obscure as I thought.