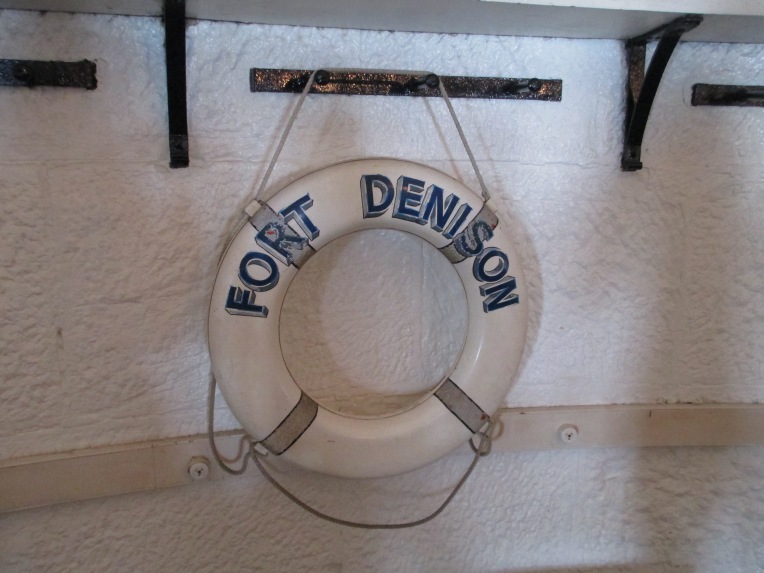 It’s easy to see Fort Denison as a funny looking little island in the Sydney Harbour, but it has a fascinating history. 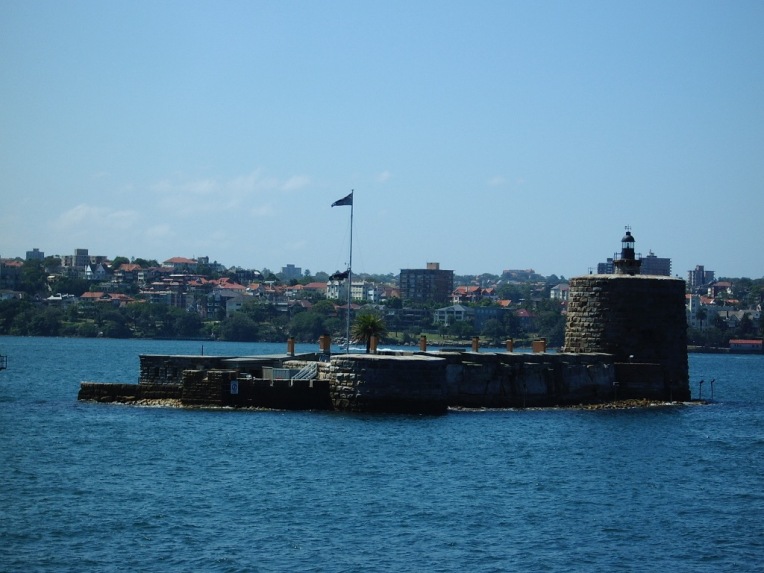 When the Europeans arrived in what is now called Sydney Harbour Fort Denison looked approximately like this.

It stood  at an elevation of about 75 feet.

For the local indigenous people the island was known as Muttewai. When the First Fleet landed the local indigenous population, the Eora, Guringai and Daruk nations, were forced inland away from traditional grounds and killed, by European diseases such as small pox, in the wars trying to protect their land from Europeans settlers and quite intentionally by Europeans. For more information click here.

Fort Denison itself wasn’t called Fort Denison by the European settlers to begin with. It was originally known as Pinchgut Island. Pinchgut is a nautical term meaning a narrow passage, but it was also used because the convicts they marooned there as punishment, before a gaol was built, had very little food so they always had ‘pinched guts’.  In the early 1800s a gibbet was also erected on the island to display a convict called Francis Morgan in chains. It was named Fort Denison after the current Governor of New South Wales in 1857.

The island of Fort Denison was levelled in the 1840s, partly with the idea of making it a defensive site and partly to mine the sandstone which was used to help construct Bennelong Point, which the Opera House now sits on. One of the reasons for the levelling of the island to make it a defensive position was the completely unexpected arrival of two American men of war in December 1839. They arrived over night and the locals completely failed to notice their arrival until the morning. The commander of the American ships was quoted as saying

“If [we had been] enemies, it would have been in our power before daylight to have fired all the Shipping and store houses, laid the town under contribution and departed unhurt.”

Developing the island to be a fortification was one of the reactions to this nasty shock. The top was blasted, but the majority of the work was carried out by convicts with pickaxes. By 1842 it was almost completely levelled. No decisions, however,  regarding the island’s use as a defensive structure were made and it was left levelled for a number of years.

The settlers in Sydney Harbour were always frightened of attack and coastal defences were erected, but when the Crimean War broke out in the 1850s there was serious and widespread fear of a Russian attack on Sydney. It was decided definitively that a defensive fort should be built on the island. The fort was built by paid labour with 8000 tonnes of sandstone brought over for the construction of the Martello Tower, gun batteries and barracks. The Martello Tower is the only one in Australia and one of the last of its type of Martello Tower in the world. The walls in the base of the tower are four metres thick.

Martello Towers are a very particular type of structure and this one, the whole fort was ready for habitation by 1857, is actually one of the later examples of its kind. Martello Towers were built to a specific plan based on a tower on Mortella Point in Corsica, which held off two British warships for two days in 1794. The British were so impressed by the design that they copied it and it was replicated across the empire. Martello Towers were designed to protect the men within from cannon fire and to have cannon on the top and inside to fire back. For more information on Martello Towers click here. In the case of the Fort Denison Martello Tower, it would have originally have had a cannon on the top, but it was removed much later. You can see roughly where the cannon would have stood below. 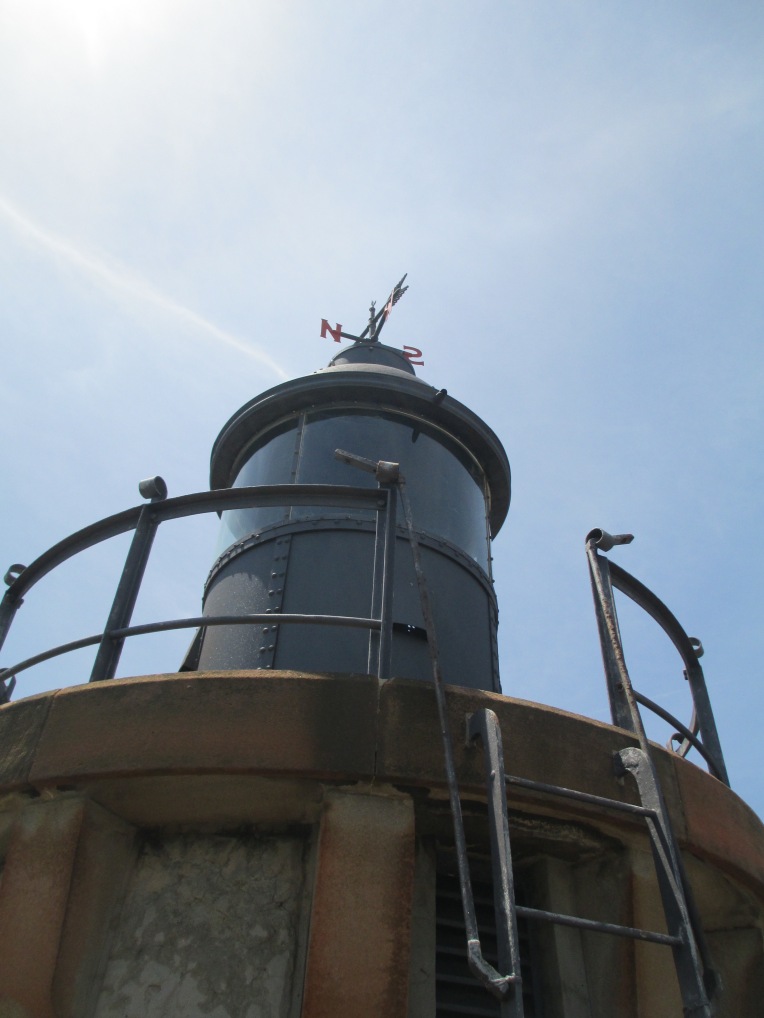 The three cannons inside the upstairs room remain because it is impossible remove them. 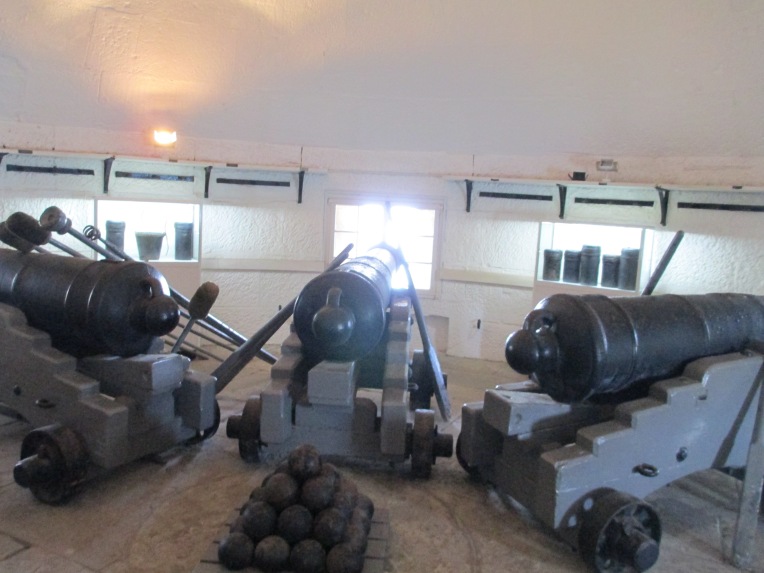 They were winched into place and then the roof was finished over them. As you can see from the keystone it was completed in 1857.

From the top of the tower, just below where the original cannon would have stood, you can see the power that the view from the tower would have commanded. The bell in the photo is the fog bell. 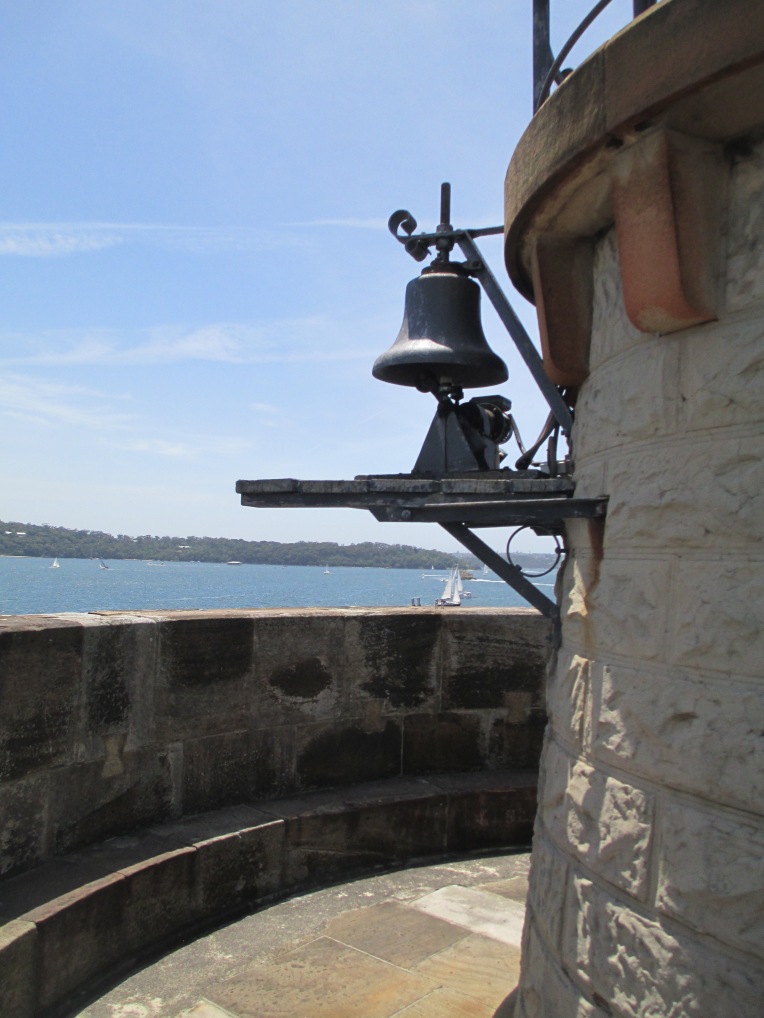 The tower is also built to withstand cannon fire. You can see the linking keystones in the the photo below. They are made from granite and are embedded in the softer large blocks of sandstone that make up the rest of the tower, to link them together and to hold the tower in one piece in the face of a strike from a cannon.

The tower also contains the powder storage room, where you can still see the rings left in the floor by the powder barrels, as well as another storage room next door. When men were collecting the powder for the guns they had to take their shoes off as their hobnail boots could cause sparks and set the gun powder off. 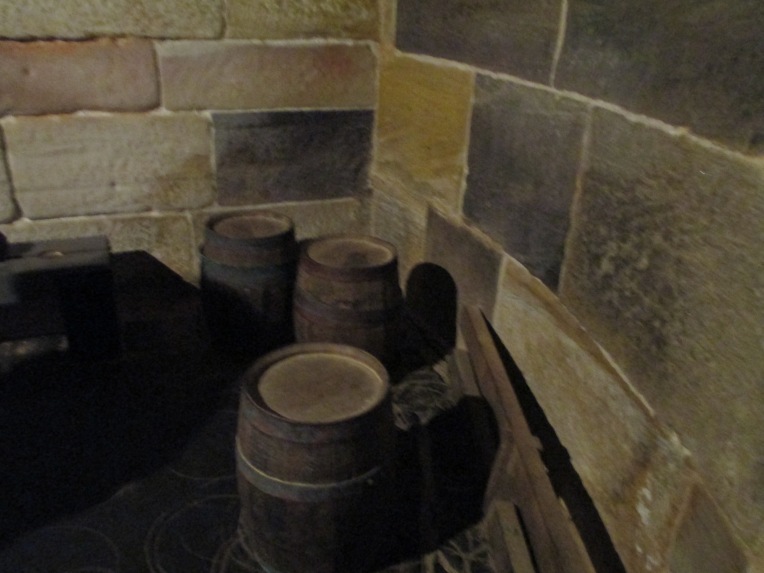 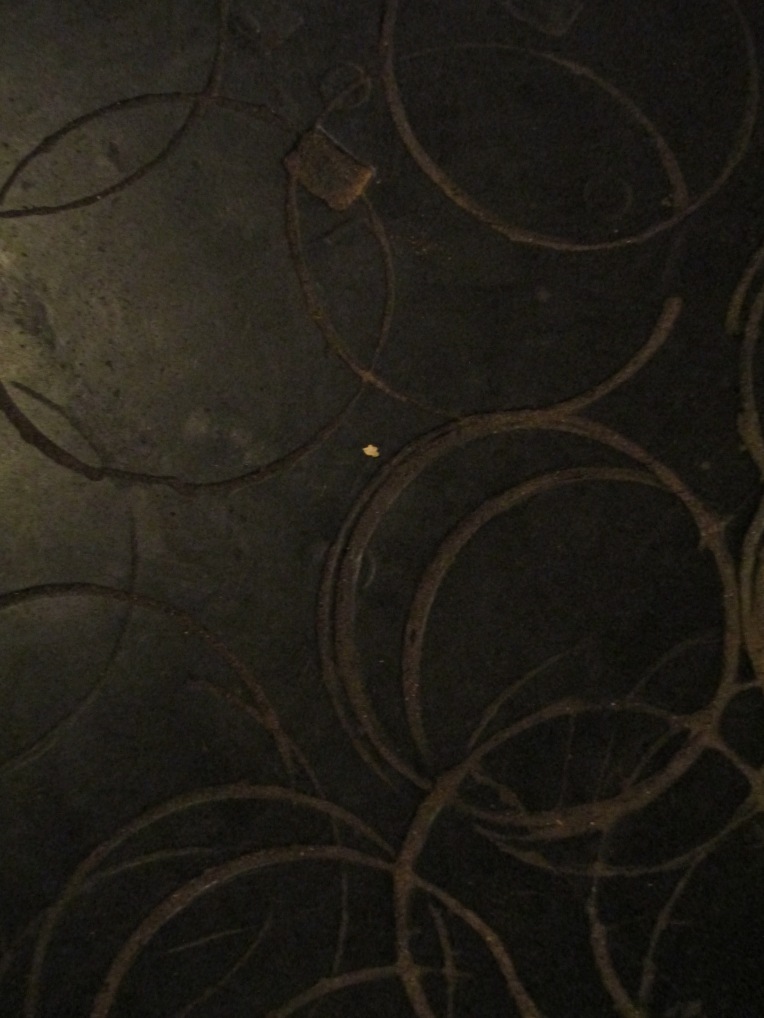 The tower also has musket loupes in the wall as well as the cannon that were mounted around the base of the tower in the battery. You can see a loupe below as well as the view through one of the recesses in which a cannon would have stood in. It is believed that a shot from a cannon in this position could have reached the headland you can see in the photo. 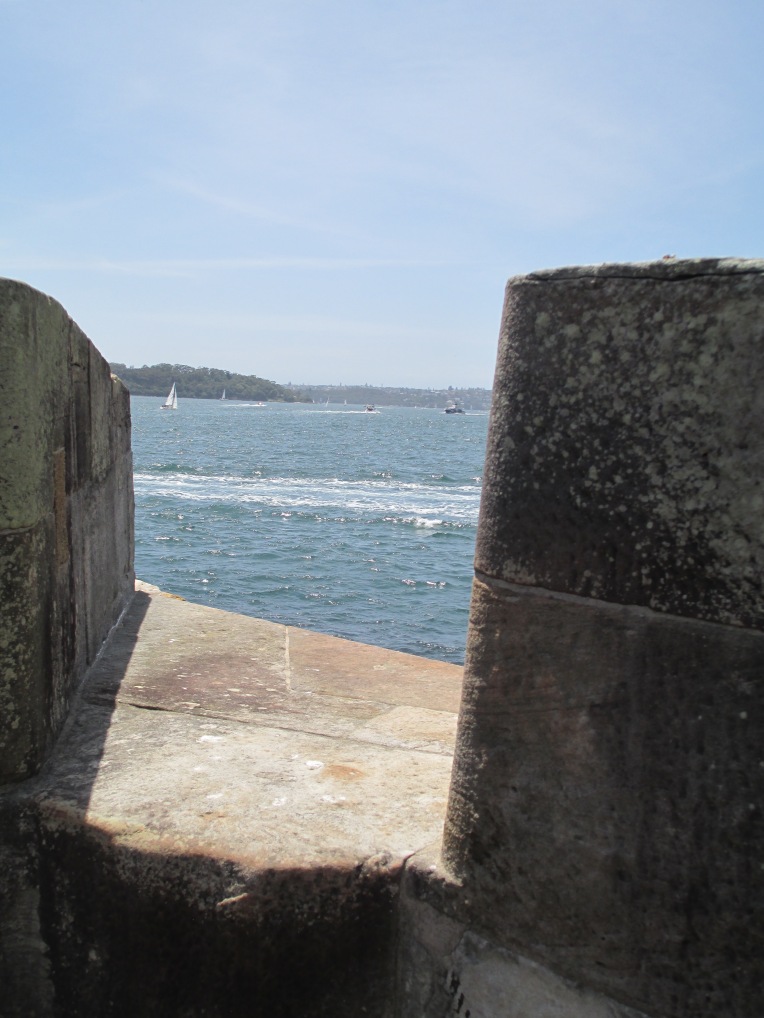 As well as the guns in the tower there were some very impressive guns in the bastion area of the Fort which can be seen on the left at the end of the photo below. The flag is a navigational aid.

The semi circular bastion was added as the fort was built and it housed 2 cast iron ten inch shell guns each weighing 4 420 kg, like the guns in the battery these guns were mounted on movable carriages. One covered the shipping channel and one pointed south towards the harbour.

The Fort was built in response to what was seen as a serious threat and the nine massive 32 pounder guns could have destroyed wooden sailing ships. The development of armour plated steam ships and the improvement of the guns on said ships, however,  rendered the Fort obsolete by the 1870s. Fort Denison has never been in a real military battle, although there have been military units quartered there for many years. In the 19th century the Royal Artillery used the Fort for artillery practice as did the NSW Volunteer Artillery. Since the 1890s the main use has been as a light and tide station, and tides as still measured from there today. By 1936 the military units had moved out and a caretaker had moved in. You can see some of the history of the Fort and some of the work of the caretaker in the videos below from 1936. The videos are from the National Film and Sound Archive and can be found here.

The caretakers were not only single men living alone on the island. The first lighthouse keeper, Thomas Wren, and his family arrived in 1869. In the 1950s the island was occupied by Osmund Jarvis, his wife Jessie and their children. They used to show people around the fort and Jessie would make tea and scones for visitors. They grew vegetables and kept animals and were largely self sufficient, though they did bring in supplies from the mainland. You can see a fruit tree in the photo below, which is a relic from when the island was lived on. The longest serving caretaker was Cliff Morris who lived on the Fort for 25 years with his wife and two daughters. The final caretaker, Norman Dow and his family of five, left in 1992.

In the second video from 1936 you can see the caretaker loading the small cannon that was fired at 1pm from 1906 until 1942 to allow ships to calibrate their chronometers. However the practice was discontinued in 1942 because of World War II, the sound was frightening understandably nervous Sydneysiders. The tradition was reinstated in 1986 and the modern firing can be seen the video below. I apologise for the wonkyness of the footage. I was trying to hold my phone still and cover my ears, as instructed, at the same time.

The firing of the 1 pm cannon might have been discontinued during World War II, but some more modern fire power was installed on the Fort. In the photo below you can see the remains of the concrete block in the bastion area of the fort. In 1942 a 3 inch 20 hundred weight anti aircraft gun was installed here to defend from Japanese attack. It could be lowered to fire at ships if necessary.

Fort Denison is now an important tourist attraction, the barracks is used as a lovely and informative museum as well as being part of a restaurant with the most incredible views.

It is a place with a fascinating and complicated past, and is well worth a visit. If you do go I would highly recommend doing the guided tour. As well as supporting the national parks service who run the island, it is also the only way you’ll get inside the Martello Tower, which is absolutely worth it. Apart from anything else, the whole place is in the most beautiful location.

[1] Significantly more qualified people have written much better and in more detail about the atrocities committed towards the indigenous population of Australia. I would recommend anyone who wants a broader overview of exactly what was destroyed to read Dark Emu by Bruce Pascoe.