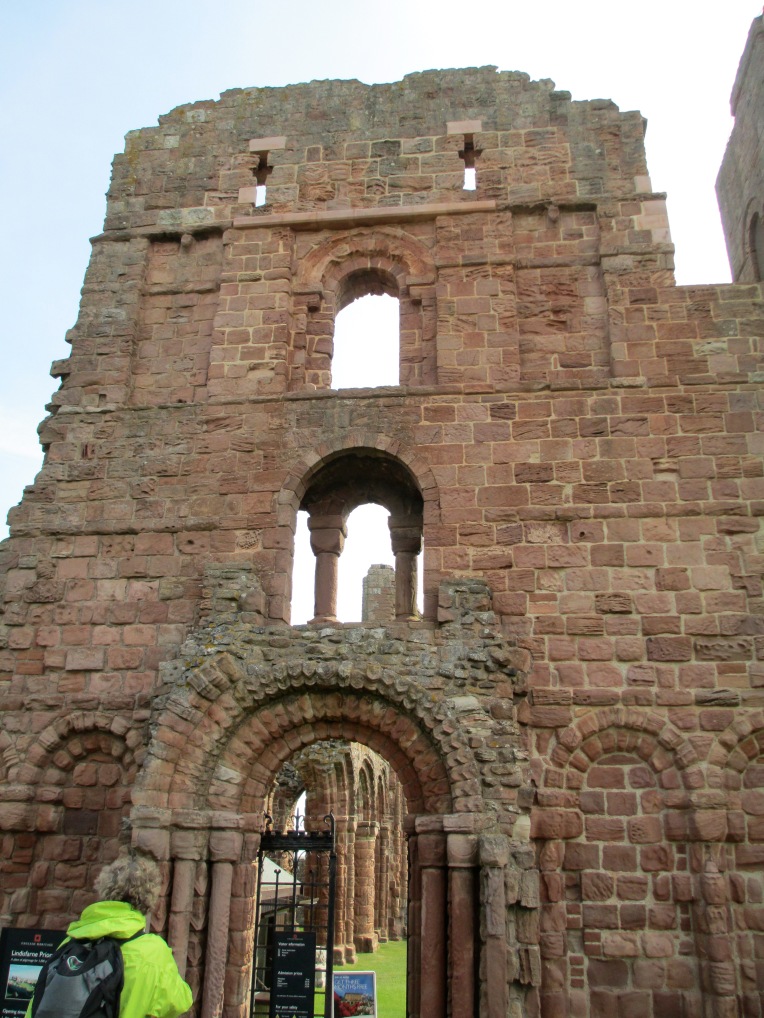 The elegant and almost ethereal Lindisfarne Priory sits on Holy Island, which is only accessible by a causeway that is completely flooded with every high tide. The priory is one of the oldest religious sites in England. The land was gifted to Saint Aiden by Oswald, an Anglo Saxon King, in 635. Saint Aiden and later Saint Cuthbert used it as a base to convert Northumberland to Christianity. Lindisfarne is known as the cradle of Christianity in England.

Saint Cuthbert became bishop in 685 and when he died in 687 he was buried in a stone coffin on Lindisfarne. When his tomb was opened 11 years later the body was “incorrupt,” which was taken as a sign of his saintliness and a cult sprang up around him. The cult attracted pilgrims and ensured Lindisfarne’s place as a centre of Christian learning. This resulted in what, for me, is the most interesting part of the priory’s history; the famous Lindisfarne Gospels. They were begun at the priory in 698.

Very unusually for a medieval manuscript we know not only that the gospels were the work of one man, but who that man was. A note was added later identifying the artist as Eadfrith, who was bishop of Lindisfarne between 698 and 721. The work is one of extraordinary detail and skill, using a wide variety of pigments, although it remains partly unfinished due to Eadfrith’s death in 721. The Lindisfarne Gospels embodied a sense of Englishness that was growing at the time; the gospels are a mixture of Celtic, Anglo-Saxon, Roman, Coptic and Eastern traditions. They symbolise a realm that was beginning to develop an individual identity. It is also truly beautiful.

To return to the priory itself. The origins of what you see today largely dates to the early 12th century when the priory was re-founded in 1122. The priory was abandoned in 875 after a series of devastating Viking raids from the 790s onwards led to the decision being taken that remaining on the island wasn’t safe. The church, the remains of which you can see in the first photo, was built around 1150.

The priory continued despite ongoing border warfare until it was dissolved under the Dissolution of the Monasteries in 1537. It was one of the 200 small religious houses that were the first to be suppressed.

The photos (apart from the gospel) are all mine